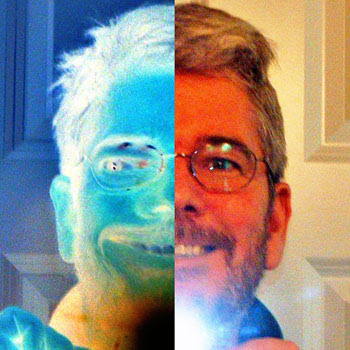 Most of the time when I think of crazy I'm referring more to being eccentric or quirky. And I find that an endearing quality. I relate to mildly crazy people more than I do to excessively straight people. But I suppose as with anything, there are varying degrees of crazy. A little bit crazy is better than really crazy.
I think it is easy to tolerate crazy people if you live in a major city. Growing up in Boise, we more or less kept our crazy people in the spare room watching television like my Uncle Ira who thought the Red Chinese were tunneling under the house to get him. Oh, there was this guy who would walk down the middle of Broadway near Boise State University carrying on a rather boisterous conversation with an invisible person. He wore a tiny cowboy hat, horn rim glasses and shorts. He seemed harmless but he stuck out like sore thumb.
Downtown Seattle is Loony Central. I think the Boise guy who talked to invisible people would have found it uncomfortable to live here because of the number of other people trying to talk to his non-existent friends. After living here for 27 years nothing much phases me anymore. Shoot, I even walk down the street babbling. It helps me blend in. And bottom line, sometimes being crazy keeps me sane.
Posted by Time at 1:28 PM

I like the term bonkers or barking mad... and I mean that in an endearing way.

I know a psycho bitch or two and there is nothing endearing about them at all. Great post Tim. It made me smile. I especially liked the mental image I got of the man in Boise with the tiny cowboy hat, horn rimmed glasses and shorts. I bet he was cute.

WS,
Nothing worse than being normal.

My son says i'm "special, in an unusual sort of way".

Gotta love a kid who 'gets' it!

LMAO.....Got any pics of you in your tiny cowboy hat, horn rimmed glasses and shorts???

The entire downtown area (SF) collectively lost its mind and started talking to itself several years ago... it happened overnight, and I was the one needing to adjust my reflex thought from"humm, off your meds, sweeetie?" to realizing they were just on the phone.

I'm still not sure that talking to friends on the phone while hanging out with other friends isn't a sign of bad-crazy.

My favorites include: Not playing with a full deck, not firing on all cyliders and Dang, that guy must be from Seattle.

Of course these may just be local terms and may not apply in all areas. Check local listings for applicability.

Blazngfyre,
I have always though you were one of the special people. :)

Gypsy,
I only have photos of the imaginary people I talk to.

Hayden,
Those cell phone things have caused a great deal of confusion amongst the crazy community.

Lights,
People from Bakersfield shouldn't be talking trash about people from Seattle and their invisible friends. I always thought you were a 60 watt bulb in a 100-watt socket, anyway.

Call me crazy, but I think you're on to something here. JP/deb