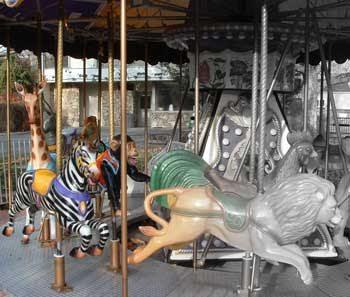 I have come to realize that the blog world, as with the real world, doesn't revolve around me.

On Thanksgiving morning we decided we needed to find someplace for breakfast so we could last until my brother's turkey dinner made it to the table. He promised a 2 p.m. meal time, but experience has taught us to always tack on two hours to my brother's dinner predictions.

Although you can find a million restaurants to eat dinner, Boise lacks places to grab a basic breakfast. Ironic as it may seem for a relatively small city, there aren't any diners that I know of and unlike the civilized world, most things close there on holidays. So we ended up at Denny's near the airport. I saw a comedian once who noted that no one sets out to go to a Denny's, they just end up there out of desperation. That was the case with us.

I liken Denny's to a near-death experience. I will take the liberty of generalizing here, but most of the clientele and employees at a Denny's are pretty much the walking dead. Let's face it, you aren't going to attract a master chef, 4-star servers or even decent dishwashers at a Denny's. People who work at a Denny's also end up there out of default. This Denny's in particular was ripe for attracting drifters. In addition to being near the airport, it was right off Interstate 84.

Tess and I had actually eaten at this Denny's several years ago for the very same reason we were eating there this Thanksgiving. It was about the only thing open. And I swear some of the same clientele were still propped up at the counter nursing a bad cup of coffee.

Nothing you order at Denny's ever looks like the photos in the menu. I foolishly ignore this and order what looks good. And while Tess ordered a basic eggs and hash browns I, being the perpetual masochist, ordered the Moons Over My Hammy just to force myself to say it out loud. It's almost as humiliating as going into an IHOP and ordering the Rooty Tooty Fresh and Fruity breakfast. Despite it's embarrassing name, a Moons Over My Hammy is simply a ham and egg sandwich dipped in grease. Rumor has it that the people who make Lipitor and Crestor keep a statue of a Moons Over My Hammy in their head office and say little prayers to it in gratitude for keeping America's cholesterol level off the charts.

If the Moons Over My Hammy wasn't enough to tie my stomach in knots, I drowned the greasy hash browns that came with it in Tabasco sauce and washed it all down with coffee with a taste that can only be achieved by reusing the grounds 80 times and percolating it for three weeks.

Suffice to say the breakfast did the job of staving off hunger until my brother's Thanksgiving dinner was ready late that afternoon. The downside is, as the title of this blog suggests, what goes around comes around.

I apologize now to my brother's family for what I did to their bathroom.
Posted by Time at 8:50 PM

I had a crazy feeling how this story was going to end and I was right. I'm guessing you won't be invited back next year. I love a good fry up for breakfast but that sounded disgusting even by my standards.......

Gypsy,
First thanks for being one of the few people still drop by. Apparently what goes around does come around. Denny's is disgusting no matter what you eat.

Don't you manage to get yourself sick every time you go to Boise?

Dude. Jump off the ride, buck the pattern, get out of the rut and take along some of these:

Self sufficiency - it's what's for dinner.

R.
To be honest, I didn't really get sick and violate Dan's bathroom. But the Denny's was disgusting.

As long as you are still blogging Tim, I will ALWAYS come around, even when I am not blogging myself.