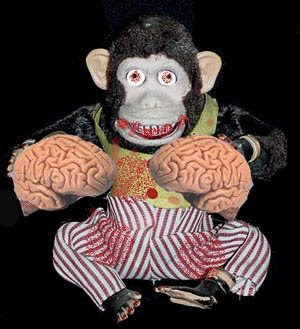 Having been out from work for a month on family leave after the birth of my son, I haven't been much on writing. Maybe it's because the Monkey Playing Cymbals was at the office chattering away and I wasn't there to be inspired by his banana-baited breath.

I missed the Monkey.

I've been back at work two days now. The Monkey has been ignoring me. He's a bit pissed that I left him alone for a month. There is nothing worse than a monkey scorned. I need his chattering as a laxative for my writer's constipation. Though too much chattering can lead to run on sentences. Ha, ha.

I could also use some sleep.

The month off from work was the longest time I've been off work since I started working full time 26 years ago. But it went by in a blink of the eye. And I feel guilty going back to work. Because trust me that working isn't near as much work as taking care of a toddler and a newborn.

I think the Monkey is forgiving me. He is smiling at me. I think I have my muse back. Give me a couple of days and I'll be producing Pulitzer Prize material again.

Congrats on your son Tim! I've been away with a broken computer, and since I "retired" in April, I can vouch for the fact that "home" work is ten times harder than "office" work.

I remember when I was on maternity leave and the time did fly by. Wouldn't it be great to be able to be in both places?

Looking forward to that Pulitzer material :)

Thanks Kat,
Missed you.

JP/deb,
I wish there was a way to be with my children and earn a living.