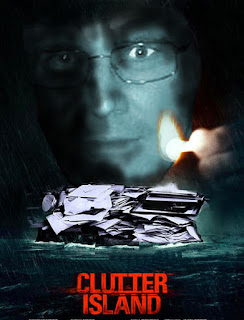 No one could ever accuse me of being a minimalist when it comes to my environment. I have always been a collector of curiosities (at least of things that are curiosities to me). One might say I am a connoisseur of the conversation piece. Others might say I accumulate weird crap.

When I was a boy my room was filled with treasures such as a football sized hornet's nest (sans hornets), various rocks, old bottles, Famous Monsters of Filmland

models, feathers and other things I couldn't live without. I may have patterned by collector nature after my father. His workshop (a former chicken coop in the backyard that he'd expanded in a two-room shed that housed his power tools and fishing tackle) was crammed with bits and pieces of things salvaged over the years.

As I got older, I used to accompany my father to country flea markets. I'd always had an affinity for the paraphernalia if the past. I loved bits and pieces of things that represented history. So I began to accumulate collectible odds and ends of questionable monetary value but priceless to me.

As I got even older I went through my obsession with Elvis stage. That merged with my obsession with collectibles, oddities and kitsch (another word for tacky). About the same time I discovered the Home Shopping Network and then the greatest crap collecting enabler of all time -- eBay.

You starting to get the picture here?

I tried telling myself I was buying all of this stuff to immerse myself in the Elvis phenomenon as background for a novel I was trying to write that involved Elvis and Quantum Physics (I won't bore you with the plot). But I was quickly surrounding myself with mountains of shot glasses, playing cards, license plates, newspapers from the day Elvis died, concert ticket stubs, liquor decanters shaped like the King and even swatches from sheets he reportedly slept on while renting a home in California.

I finally sort of got over the Elvis thing (though I still have some prime collectibles like a limited edition Elvis Epiphone guitar). But I still collected things. I started going to thrift stores and antique malls. I went through a phase of collecting vintage stoneware (Homer Laughlin diner plates, Coronado ware, etc). My house wasn't quite as bad as some of those places you see on the reality television programs about hoarders, but it was pretty bad.

What finally saved me from being crushed by my own clutter was getting married. I'd lived alone for 18 or so years before I met my wife. She shares my mother's minimalist approach to possessions. When we merged households, it was obvious that I needed rethink my lifestyle.

It wasn't easy at first. A part of me died when I packed load after load of mannequins, dishes, sombreros, and pictures of dogs playing poker into my pickup and donated them to the local thrift store. I think I turned over enough crap to my neighborhood Value Village to stock their shelves for a year.

We purchased a new house together and all new furniture. All that was left of my clutter collection was a modest number of boxes and bins that line shelves in our garage and a few prize possessions that decorate one room of our house that functions as my home office.

All and all, I've managed to curb my compulsive desire to collect things. Oh, I admit my work office retains some of my penchant for memorabilia. But it is organized in a quasi-tasteful manner and consists primarily of sports memorabilia and pictures my children have colored or painted.

I am glad I am no longer an out of control collect-a-holic. I still need a certain amount of clutter around me to feed my creative need for organized chaos, but all in all I am happy without out of control piles of crap everywhere. And since we had children, I get plenty of doses of clutter without having to create it myself.

But that's another blog post.
Posted by Time at 1:25 PM

You didn't get rid of your classic Playboy Collection did you? Even though the models of the 80's don't do it for me it would be a sad thing to lose that bit of Americana.

R.
You must be thinking of your Uncle Dan. He still is a hoarder. Worse still, he is a Republican and a Bronco fan :)

R.
You are thinking of your Uncle Dan. He is still a hoarder (and worse a Republican and Broncos fan).