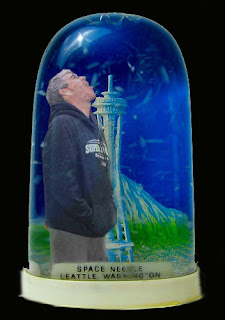 As predicted, it did indeed dump a great deal of snow here on Tuesday night. By morning we had five inches of snow. But a heavy rain was falling when I backed my car out of the driveway into the now slush filled streets to drive to the train station.

My wife rushed our kids to a local park to make slush angels and lopsided snowmen in the rain. By the time I returned home in the evening, the snow had been reduced to what looked like skid row versions of Frosty the snowman lying in the gutters.

Temperatures are now in the 50s so the bogeyman has retreated into the closet until the next slow news day.

I'm sure other parts of the nation would like to dope slap Seattle for its whining about snow. We are definitely a city of weather wimps. Perhaps it comes from all the rain. It creates a mental mold that is hard to shake off. Even when the sun shines here and the temperatures rise above 60 degrees, people bitch about the heat.

Ironically, I moved here years ago to go to college because I liked the idea of being near water. You would have thought that would lead me to look for colleges in California or Florida, but no, I chose the Pacific Northwest. Forget the fact that when sitcom and screenplay writers want to pick someplace at the edge of the known world, they pick Seattle. When Frasier Crane ran away from Cheers and his ex-wife Lilith, he ended up in Seattle because it is as far as you can get from Boston without going to Alaska. And I'm sure the writers ruled out Alaska because it would be too much of a ripoff of Northern Exposure.

I am used to living in places which are considered on the fringe of civilization and culture. Idaho is also used by screenwriters as a place still waiting to be discovered by Lewis and Clark. I am surprised Kelsy Grammer, star of Frasier, didn't end up in Boise instead of Virginia in the plot of his failed sitcom Hank a few years ago.

I can tell you though, after growing up in Idaho, Seattle is pretty darned urban hip in comparison. But the rain thing is a bummer. And don't get me started again about what happens when it snows here. Also, living here makes you digress a lot.
Posted by Time at 12:49 PM