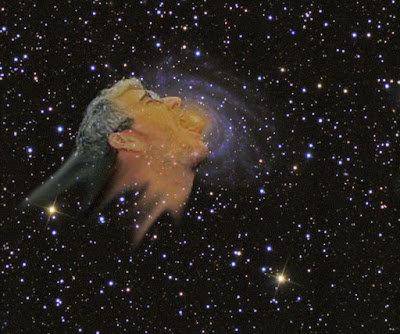 Sounds of laughter shades of life
are ringing through my open ears
exciting and inviting me
Limitless undying love which
shines around me like a million suns
It calls me on and on across the universe
--John Lennon, Across the Universe

I was reading my son a small book about space the other day. Or more accurately, he handed me the book, asked me to read it to him and then proceeded to climb on my back and drive a small model car on top of my head while periodically asking me why Nemo went down the toilet. I managed to focus on a few of the paragraphs, in particular one that said scientists believe there are billions of galaxies like ours in the universe.

It reminded me of when I was a kid camping along the banks of the North Fork of the Boise River with my family, laying outside under the stars staring at the Milky Way (our galaxy, not the candy bar) and marveling at the endlessness of it all. And even then, I knew that it was impossible that with all of the billions of galaxies with the trillions of stars and the zillions of planets that we could be the only living creatures in existence.

Yet many humans still insist that we are the only "intelligent" life in the universe. How pitifully arrogant. I have questioned my entire life whether or not we can even be classified as intelligent life. At times I wonder if we are merely sea monkeys  blindly following some superior being's flashlight as they shine it from one side of our bowl to the other.

I suppose this is a very Horton Hears a Whoish way of looking at the universe. But it is definitely true in my own microcosm of it. As a young boy, I am sad to say that I often played "superior being" games with ant colonies that infested my grandmother's yard. On more than one occasion, I unleashed my wrath on the poor creatures with a magnifying glass or simply a rubber mallet. If ants reasoned in the same way as humans, I'm sure they thought they had offended the gods in some way.

But fortunately for the bulk of the creatures on earth, humans seem to be the only ones cursed with wondering why they are here and what's next. The only thing animals and insects seem to be concerned with is where the next meal is coming from and when is the next opportunity to propagate their species.

Despite my misgivings about the ultimate intelligence of humans, I am amazed at the knowledge and inventions we've managed to come up with. It is pretty impressive for a species that had its roots in cave dwellers cowering in the mud trying to make it through the night without becoming a midnight snack for less intelligent but better physically equipped creatures. The fact that we've made such great strides scientifically makes me a firm believer in the collective consciousness that supposedly helps us accumulate knowledge over generations without having to start from scratch at birth.

Though you would think that we would have learned that wars don't ultimately accomplish much and no one looks good with blue hair and a Mohawk.

We look to the universe for ultimate answers, however, because it is the ultimate mystery. Our brains can't really fathom infinity even when it stares us in the cosmic face. Stories like Carl Sagan's Contact or Arthur C. Clarke's 2001 a Space Odyssey tease us with the possibility that the answers are out there and then they leave us staring blankly like a monkey handed a calculator and a tax return. We feel like the answer is there somewhere, but we feel too stupid to grasp it and too embarrassed to admit it.

It's also kind of like going to an exhibit of modern art.

I get a bit impatient with scientist's fascination with what I think are pretty useless details. In the ultimate scheme of things, does it really help to know what minerals the planet Mercury is composed of? I'm sure a scientist could explain the significance to me, but I am also pretty sure I wouldn't understand the explanation (note to my nephew Richard: Please don't try and explain the significance to me).

I'm kind of banking on learning more about the meaning of the universe when I walk into the light (euphemism for die). This is why I'm really hoping I don't get overly senile. Because it would really be a bummer to achieve enlightenment and be oblivious to it while not wearing pants and wondering where I left my Hotwheels collection.

So true! And part of the proof is that this is the first comment I've had in months. Thanks!