Out of my ivy league 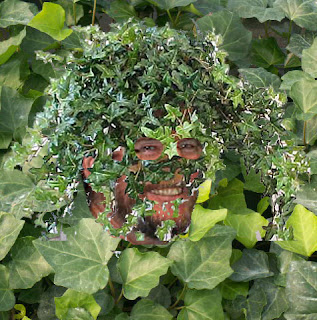 Since we've had uncharacteristically sunny weather on weekends this summer, I've managed to spend more time in my own little half-acre woods battling the forces of nature. And although I haven't given up my psychological battle of wills with Theodore, my mountain beaver nemesis, I have focused more of my attention on his vegetation counterpart: an infestation of English Ivy.

The only thing I think is worse than English Ivy and a horsetail infestation (which I battled at the same time I was fighting with Theodore) is a blackberry vine infestation. I have them as well, but they are confined to the outer reaches of my Kingdom and aren't quite as prevalent as the ivy. Ivy is the cockroach of the plant world. It grows everywhere and anywhere and seems impervious to any attempts to get rid of it. At times I am afraid to sit down on the bench in my backyard for fear I'll doze off and wake up covered with ivy.

The sad thing about the ivy that has overtaken much of the slopes in my backyard is that some moron in the past actually planted it probably thinking it would be great ground cover and help prevent the soil from eroding on the slope behind my house that terminates on a creek passing through my property. The irony is that not only doesn't ivy prevent erosion, it likely contributes to it. Plus it does its best to choke out every other form of life in the backyard except for the damned mountain beaver.

I started fighting the ivy last summer soon after we moved into our house. But I concentrated on vines that had crept out of the garden and were cascading over a wooden fence and attempting to choke a hedge that gives us a bit of privacy from a busy street that borders our property. Whoever lived in this house in years past actually installed trellis' on the fence to help the ivy pull itself up and over (as well as through) the fence.

I pulled and slashed and cut my way through what must have amounted to miles of the stuff. It was scary how it had worked its way through the small cracks between fence board to continue its efforts to cover the globe with ivy vines. I was afraid that the fence would collapse once I'd removed a bulk of the ivy. It didn't, but it is obviously the worse for the wear from supporting a ton of ivy for however many years it has been growing there.

The freaky thing about ivy is that even after you've ripped it off from something and separated it from it's main root, it doesn't seem to die. And since ivy is essentially poisonous, nothing will eat them, even a stinking mountain beaver.

After clearing the ivy off my fence, I started pulling it from the slope in my backyard. I have to tell you that it is pretty daunting to approach what amounts to a carpet of ivy on a fairly steep slope worrying that any minute you are going to uncover yet another mountain beaver hole occupied by a pissy little creature made more pissy by the fact that you've been filling in his entrances with used kitty litter and rocks.

Pulling ivy vines up by the root is slow work and it wrecks havoc on your hands. But after several days of cutting, pulling and cussing, I cleared a pretty major swath of dirt. So I decided to make a trip to the local home improvement super store to find some ground cover to replace the nasty ivy I'd ripped up before it began to creep its way up again. And while I'm scanning flats of various types of ground cover, what do I run into for $7.99 a flat?

I'm tempted to put an ad on Craig's List offering people the opportunity to dig up their own English Ivy starts from my back yard for a nominal fee. Hell, maybe I'll even offer to throw in a mountain beaver as a bonus.
Posted by Time at 3:08 PM

With my experience with English Ivy, I think it is only a matter of time until you are going to wake up to find vines creeping up the walls of your home. In the meantime, I'd be happy to send you some of mine :)