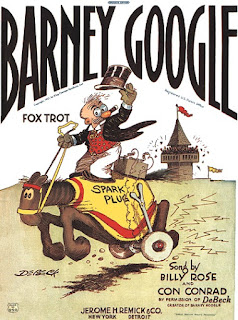 That post title will mean nothing to a vast majority of people under 50. And it likely won't mean anything to a vast majority of people over 50 as well. Barney Google was a cartoon character from a comic strip created by cartoonist Billy DeBeck. It was popular in the early 1920s. And it inspired a popular song in 1923 coincidentally called, "Barney Google."  The chorus of the song went like this:


Barney Google, with the goo-goo-goo-ga-ly eyes.
Barney Google had a wife three times his size
She sued Barney for divorce
Now he's living with his horse

The only reason I know this was because my grandmother had Victrola when I was growing up and one of the only records she had was Barney Google. I used to get a kick out of cranking the thing up and listening to the scratchy voice from forty years earlier belting out "Barney Google with the goo-goo-goo-ga-ly eyes."

Ironically, just a few years later I'd be sitting next to my portable phonograph listening to John Lennon belt out "I am the egg man, they are the egg men. I am the walrus, goo goo g'joob." Perhaps John's grandmother had a Victrola as well.

I don't recall ever seeing the Barney Google comic strip. Billy DeBeck died in 1942 and along with him Barney Google. So by the time I heard the song, there was nothing to put it into context for me. I just thought it was a silly song about a bug eyed guy and his wife. It wasn't until the other day that, on a whim, I Googled Barney Google and discovered the story behind the song I'd heard so many years ago (and stuck in my head like a popcorn husk behind my molar).

Another irony here is that Google, the mega search engine that provides the portal for all knowledge, is simply a typo of the word, "Googol." So it has nothing to do with Barney Google or his goo-goo-goo-ga-ly eyes.

Incidentally, the lyrics for the song "Barney Google" were written by Billy Rose. Rose was once married to singer/actress Fanny Brice, the inspiration for the Funny Girl and Funny Lady movies starring Barbra Streisand. Billy Rose was played by James Caan in Funny Lady. James Caan didn't look anything like the real Billy Rose, nor did he have goo-goo-goo-ga-ly eyes.

You've got to love Google, though. It inspires so many of my magnificent digressions.
Posted by Time at 8:25 AM