While we were bopping around on the road to Boise and back, Theodore, my unwelcome Mountain Beaver, was given free reign to restore his burrow entrances in my backyard.  So yesterday was the first time I actually had an opportunity to get out there and renew my efforts to discourage him from turning my backyard into a Mountain Beaver condo with multiple entrances.

I filled a couple of the worst holes with a couple of bags of used kitty litter courtesy of my three cats. I topped off the holes with large rocks and some concrete stepping stones. This morning Theodore was back. He didn't try reopening the holes I'd plugged with cat litter, but he did pop up in a new hole almost on the path to my garden shed. And despite all of the information I'd read about Mountain Beavers being nocturnal and rarely seen, Theodore was out there in plain site actively burrowing away.

I grabbed my camera and snapped several shots (using a zoom because I'm not going to test the "aggressive behavior" info I've also read about). They are a bit blurry, but you can get an idea of what Theodore looks like. 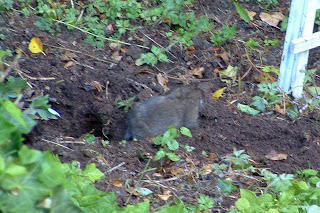 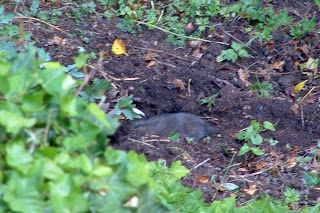 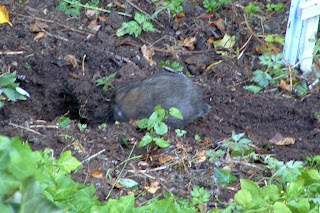 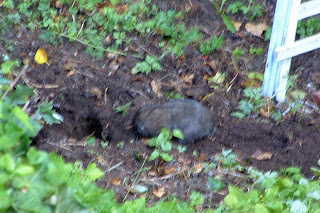 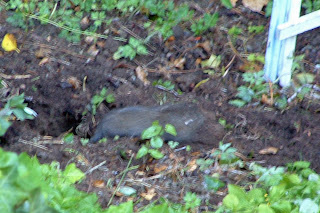 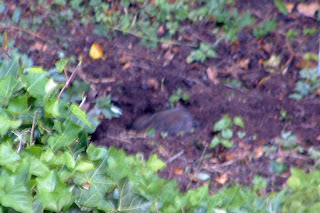 This afternoon I ventured through the gate to continue my project to reclaim the overgrown slope in my backyard. Once again I plugged up Theodore's new burrow entrances with large rocks and yet another concrete stepping stone. I then proceeded to battle the Horsetails, ivy and other assorted weeds that have taken over the landscaping, keeping a machete within reach in case Theodore wanted to talk about kitty litter. But he didn't make another appearance. But I imagine he's still there plotting his next move.