On my ghost radar 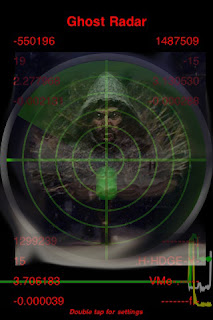 Although I don't really believe in ghosts, I have always been a sucker for a good ghost story. I guess it is human nature to want to believe that we don't just end when we die. If I knew for certain this was it, I probably wouldn't spend so much time on the treadmill and I'd have that bacon cheeseburger I craved in my last whiny post.

Since I don't have an iPhone and only recently got a Blackberry that approaches smart phone status, I have been blissfully unaware of the multitude of apps out there. But Blackberry App world is slowly introducing me to the multitude of possibilities out there to waste time with my phone without actually using it as a telephone.

Ghost Radar is created by a company called Spud Pickles (a company name you have to trust) and claims to turn your smart phone into a ghost detector by measuring electromagnetic fields, vibrations, and sounds. In short, Ghost Radar claims to analyze the quantum flux. I have no idea what quantum flux is, but it sounds pretty paranormally.

When you fire up Ghost Radar, you see what looks like a radar screen with constantly changing numbers in three of four quadrants. The fourth quadrant occasionally shows what appear to be random letters being typed by apparently dyslexic spirits. Occasionally colored dots appear supposedly indicating paranormal activity. Blue means a little activity. Green means more and yellow means even more. Red means look over your shoulder.

The really eerie part of Ghost Radar is that out of the blue (or green, yellow or red) words pop up on the screen and are spoken with a voice synthesizer. This startled me at first because I downloaded the free version that comes with virtually no instructions. Apparently you have to pony up 99 cents to get the premium version that tells you how to use it. I had to Google the thing to learn that the words are supposedly triggered by entities using your smart phone as a translator.

Most of the time the thing just spouts gibberish not unlike you hear from strangers sitting on the bus. Mine just said "fish", followed by "couple." Then "lying." One could interpret this as someone lying about the couple of fish they caught. But who doesn't lie about catching fish.

Occasionally the thing spouts things that makes the hair on the back of your neck stand up. I was sitting on the train waiting for it to leave the station. I turned on the Ghost Radar. Almost immediately red dots appeared and the thing said "nuts." I was staring out the window at some graffiti that read "Hot nuts."

Coincidence you say. That night I took my phone into my daughter's room. After I read her stories and tucked her in, I sat in a rocking chair until she fell asleep. I turned on the Ghost Radar. Dots appeared. And the thing said, "Tim." I turned it off.

Okay, I think the thing just scans your phone and finds data. Of course my name would come up. But I've read other people's experience with the thing and some claim that it says the name of people in the room with them. It is pretty unnerving.

I've just asked the Ghost Radar how I should end this blog and I'm waiting for an answer. Wait for it...here's the first word: "recently." Okay. Wait, here's the next word: "sang." Hmmm. Oh, there are lots of red dots now. The last word is coming. This should be good: "butter."  The spirits have imparted these final words, "Recently sang butter."

Yeah, I can't even imagine what the Ghost Radar would pick up and say in New Orleans :)