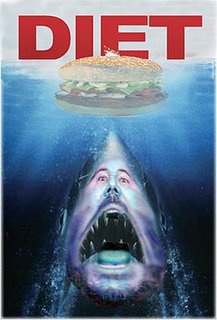 Why am I stating the obvious that you can find anywhere on the Internet or plastered on the headlines of magazines on the racks at the grocery store checkout? Because I have once again stepped up my self imposed efforts to lose weight. I say self imposed, but at my last check up, the doctor noted that my weight was up and suggested I might be "over fueling." Her suggestion was punctuated by the lab results. My cholesterol was up along with my blood sugar levels.

My immediate reaction was self loathing (not a healthy reaction). There was also an epiphany about self delusion. A few years ago after an examination to get life insurance I was forced to acknowledge that I was at an unhealthy weight. So I did something about it. I altered my diet and increased my exercise. I lost 52 pounds.

Once I was at my "healthy" weight and could wear jeans with a 31-inch waist and still breath, I assumed I could ease off the strict routine of diet and exercise. So I allowed myself occasional lapses of eating not so healthy food (i.e. stuff that actually tastes good). And I stopped weighing myself. Now granted, I didn't go crazy. I still worked out for an hour a day and avoided the worst food choices like fries, ribs, hamburgers, and pizza. But my workouts became lower energy. I just used the elliptical machines and stopped running on the treadmill.

Instead of passing up the constant snacks co-workers would leave out at work, I'd start nibbling here and there, especially as the holidays approached. I told myself a little bit here and there wouldn't hurt. I noticed my clothes weren't feeling as loose and I couldn't really wear jeans with a 31-inch waist anymore. Even my 32-inch waist pants were a bit snug. But I kept looking in the mirror and telling myself that I didn't look like I was gaining weight.

That's when the doctor pointed out that I had gained 20 pounds by over fueling my body. This was about a week before Christmas. I kicked up the workouts a notch and started running again (which I hate with a passion). I also stopped snacking and cut out many of the remaining foods I like (bread being a major one). The good news is that I can once again wear my 31-inch waist pants and I've lost the 20 pounds.

The bad news is all I really want to do is eat. And the temptation is there now that I have lost the weight again to just ease off. But the reality is that I'd just be back where I started. I want to be very clear that the weight thing isn't about vanity. Since men at my age are essentially invisible it doesn't really matter what I look like. It's more about my health and a desire to see my young children graduate from college.

Though I have to say I am sick of reading about the top 20 worst things for you to eat which coincidentally are also on someone else's top 20 best things for you to eat list. I've come to the conclusion that nothing is good for you. Diet soda apparently can make you fatter. Non-fat products have more calories and bad things in them. Natural foods generally are kept natural through chemicals. Comfort foods comfort you by sending you into a food induced coma.

Being healthy sucks. I just want a bacon cheeseburger.
Posted by Time at 3:18 PM

Haven't weighed myself for about 15 years. I eat what I want, when I want. Some of it's bad for me and some can't be.

Genetics are the key - something in my DNA is helping me.

You can't fight your genes - just buy bigger pants and be happy.

I can't fight my genes, but I can fight my jeans :)