It is easy being green 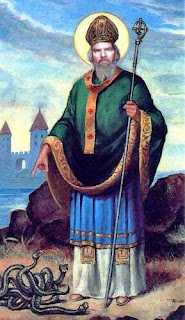 In preparation for St. Patrick's Day I have been listening to Irish music on Spotify non-stop. It has given me an insight into why the Irish drink. If their ballads aren't about someone dying in an IRA shootout, they are about drinking whiskey and attending wakes (presumably for someone killed in an IRA shootout) that they never sober up from.

Although my name is extremely Irish, genealogy has actually uncovered that it actually has its roots in England  and evolved into the Irish version in America. Add to that the fact that my father was adopted and I'm not related to the clan via blood and you separate me from the Irish even further. Plus, I was born the day after St. Patrick's Day adding insult to injury. The world parties the day before my birthday and throws up most of  my special day.

But still, I play the part of being Irish on St. Patrick's Day. For the past two years, my family has taken part in Seattle's annual St. Patrick's Day Dash, a 5K run/walk that encourages people to exploit all of the worst stereotypes of the Irish. You basically can't swing a dead (green) cat without hitting one of 7500 race participants dressing in green spandex, wearing fake red beards and t-shirts screaming, "KISS ME ARSE."

It is a definitely a family event. Try explaining to your 6-year old daughter why there is a man in gold lame' shorts, no shirt and a rubber horse head mask jogging past. I muttered something about "a horse's ass wearing a horse mask" and point out some jogging Guinness Cans. Then the Leprechaun with a goat jogs by and I'm saved.

I think the romance of the Irish stems from the beauty of their speech. And Irish speaker can meet you and basically tell you to "Go fock yer self and don ya know it" and the average America just melts. It is just a lyrical language. You then buy the person a drink they down with a "fock yer arse" toast and you laugh as if you've been recited poetry. 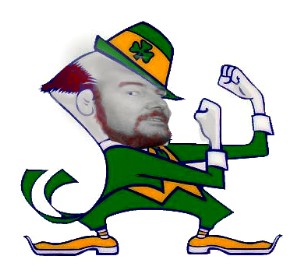 And although the Irish also have a reputation for violence, it is more of the drunken brawl variety. It's not like the Braveheart, screaming "Freedom" kind as they unwind his bowels like a garden hose. The Scottish seem a bit more noble when it comes to violence. The Irish seem to be just as proud of cleaning some one's clock for pouring a beer incorrectly as for fighting for freedom.

My favorite St. Patrick's Day was spent in New Orleans 14 years ago. I stood along a St. Patrick's Day Parade route near Bourbon Street catching green beads thrown by Irish Parade Princesses from floats that also tossed out heads of cabbage and condoms. There were tons of police cars in the parade as well since most of the police force in New Orleans are of Irish descent. I stood there drinking green beer when a large man dressed like a Leprechaun approached me, handed me a Irish wool tie and kissed me on the cheek screaming, "You are blessed amongst men."

It didn't seem weird at the time. In retrospect, I haven't a clue what it was all about.

Finally lost for words but at least I read it...

I forgive your Baggy. You are, after all, British.