No one walks in L.A. 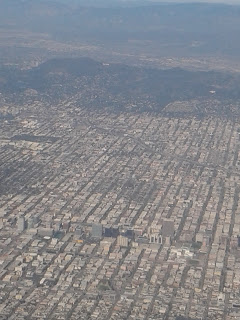 I was in Los Angeles last week on a business trip around the same time as the Academy Awards were taking place (the above photo is of LA from my airplane...that small white dash on the hill in the background is the Hollywood sign...it's the closest I got to it). The conference I was at was in a hotel in downtown L.A.  And downtown L.A. is probably one of the last places you really want to be if you are in Southern California. It has all the character of  a "Three's Company" rerun, it is seedy and unless you have a car, you are trapped there.

Other than a few excursions with fellow conference attendees to a couple of local restaurants, I barely left my hotel. I tried walking around a bit and I discovered why no one walks in L.A.  Fortunately, it was a nice hotel with a decent work out room. And one morning, while working out, I looked out the window to a courtyard by a pool and saw this hawk swoop down and grab a bird that it proceeded to leisurely devour. It took so much time eating the bird that I had time to grab my phone and snap this photo. 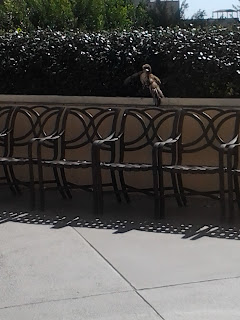 It was about the most interesting thing that happened on the trip. I didn't even see any of the Academy Awards activity though I watched bits of it on the television in my room. I felt vindicated that Lincoln didn't win best picture after my anticlimactic viewing of it. And I was happy that Daniel Day Lewis won the best actor award since I thought he did a great job portraying our 16th president although he is a foreigner.

Why is it that the British can portray Americans easily yet most American actors trying to be British sound like Dick Van Dyke in Mary Poppins? Love-leeee!

I am extremely happy that I do not live in L.A. The only thing it seems to have going for it is the weather (which they talk about a great deal on their local news...they seem obliged to explain why the Santa Ana winds are so warm ad nauseam). I realize that few people actually live in downtown L.A. (other than those camped out in Pershing Square and in tents along some of the streets). But I can honestly say that, other than Dallas, I have never been in a downtown so devoid of charm or personality.

But as I sit in my office staring out the window at the various shades of gray that make up Seattle, I do miss the sun. Wait, there it is. No. Sorry, that was the reflection of my lamp on the window pane.