Me, myself and George 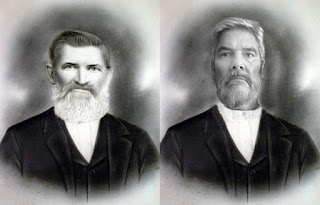 My great-great grandfather was George D. Knox. He was born around 1832, spent some time in a mental institution, fought in the civil war for the Union, married my great-great grandmother Amanda (20 years younger than him) and had six kids before moving to Idaho. He died there in 1911 when he was 79.

That's about all I know about him. I have three photos of him. Including this one with Amanda and my grandmother (who was born in 1901 and was raised by her grandparents): 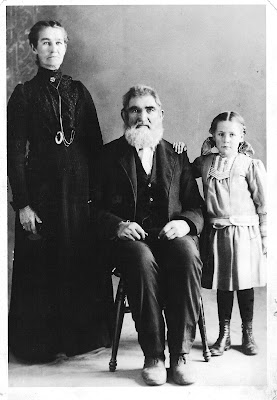 For whatever reason, I find myself thinking about my great, great grandfather when I look in the mirror these days. Maybe it is my beard (though George's is much fuller than mine ever will be). Or maybe it is the eyes. I'm guessing he had blue eyes.

I think it is more of the essence of his look that makes me think I am like him. I'm hoping it isn't his stint in a mental institution. I only know about that because I found it in an 1850 U.S. Census in Ohio that lists the then 21-year old George's occupations as chair maker (crossed out and replaced by "none"). Then there is the simple notation, "Insane." He is also listed in another census conducted at the Ohio Lunatic Asylum a few days later.

Ten years later he was listed in the Census as living in Iowa with his mother. His occupation was farmer. Around 1863 he was drafted and served in the 19th Regiment, Iowa Infantry as a Private. He married Amanda in 1870 and wasted no time starting a family. They moved to Kansas and had the rest of their family before moving to Idaho.

That is George in a nutshell (no pun intended). I know nothing about his personality or his likes, or dislikes. I have been to his grave but it left me with no clues. All I have are the old portraits. And they don't show anything but stoic black and white moments captured near the turn of the century.

There is no one alive in my family who knew George. My Aunt Irma speaks a bit of him, but her memories are only through bits and pieces of hearsay from my grandmother. Amanda died a year before Irma was born. Yet she writes to me of her as if she knew her well. I believe Irma also thinks George was a confederate soldier. 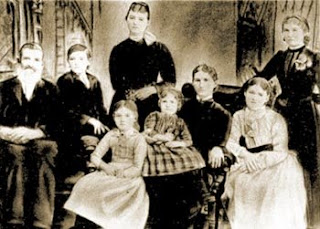 So George, the man is a mystery to me. He is one of the farthest roots of my family tree and is responsible for much of the events that shaped where I'd come into the world. Yet he has left me no memories or stories. Just what I can piece together from frustrating scraps of bureaucratic records.

But still, when I look into the mirror, I see George looking back at me.
Posted by Time at 10:07 AM