The sky is falling 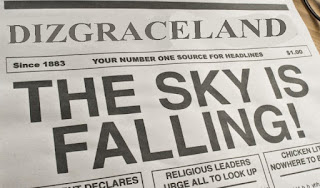 Social media just seems to fan the flames. We all become eyewitnesses to violence and bigotry. And everyone chooses sides and starts throwing stones.

I am amazed at how quickly the outrage at police killing two black men was eclipsed by a black man killing five police officers. And his justification was that he was upset by the killing of the two black men.

It is the same irony I find in spanking a child for hitting a sibling. Violence does not stop violence any more than throwing gas on a fire will put it out.


Me writing about the senselessness of what is happening in the world now doesn't change it either. But I feel like I need to do something to avoid this sense of hopelessness. Part of it is my age. I've lived long enough to know that what is going on in the world now is nothing new. There always seems to be senseless violence.

John F. Kennedy was assassinated when I was five. His brother Bobby and civil rights leader were gunned down when I was ten. Daily images of the Vietnam war were being shown on my television from the time I was in grade school until I graduated from high school. Although living in Idaho, I was also keenly aware of the civil rights movement and the divide between races.

George Wallace was the racist candidate back in the 60s until he was paralyzed by an assassin's bullet. Political rhetoric has always been around. I watched Nixon resign in disgrace when I was a junior in high school.

There were riots and racial unrest when I was growing up. Remember Rodney King?

More senseless killings. I still mourn the loss of John Lennon to a madman in the early 80s.

These are just the incidents of violence I can recall. Throughout history there have been countless other incidents, wars, murders, and riots.

So which America is Trump claiming he can make great again.