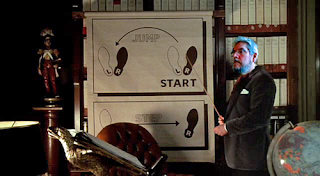 
Time warp is of course a song from Rocky Horror Picture Show, a 1975 cult classic film that developed a cult following at midnight showings in theaters across the country. It is still screened at midnight. I first saw the film in Seattle in the early 1980s. I was not ready at the time for the people who dress up as their favorite film character and act out the plot as the film rolls behind them. Nor was I ready for the audience participation that requires shouting out things at key plot points.

Not that Rocky Horror has much of a plot.  Critics panned it when it was first released. If you live under a rock and have never seen it, it is about a young couple whose car breaks down in the rain near the castle of Dr. Frank N. Furter, a self-proclaimed "sweet transvestite from Transsexual, Transylvania." The mad doctor brings a creature to life in transvestite Frankenstein fashion and everyone basically sleeps with everyone else.

Oh, and it is a musical. And honestly, the music is kind of catchy (especially after you listen to it enough times). Thus the lyrics from "Time Warp" which started this whole diatribe in the first place. The song is played when Brad and Janet (the young straight couple) first enter the castle and interrupt a party gathering to witness Dr. Frank N. Furter create a creature. Riff Raff, the doctor's butler, begins singing the song and launches the party into the Time Warp dance.

"Let's do the Time Warp again," pops into my head when I'm experiencing a kind of "It's Groundhog's Day" deja vu. Technically time warp refers the feeling that time has stopped or is going backwards.  I think of it as a time loop or a literal Vine video of the mind space continuum.

I was listening to a podcast yesterday that was an interview with a famous brain surgeon who basically said that the brain creates everything. But scientists don't know how it creates everything. So I can only conclude that my brain takes a jump to the left every now and then and does the time warp dance.

This goes hand in hand (or brain in brain) with the feeling I get now and then that all of my past experiences are taking place concurrently with my current experiences. The only thing missing is my future experiences. But that could be explained by my understanding of the quantum physics infinite number of possibilities/worlds theory. All futures exist until we choose a path. And then all the pasts are layered under it like an onion.

I realize rationally that all of my past experiences probably aren't playing on DVD at the same time as my present experience. It is likely the memories are just mucking about in my brain and getting mixed up with the now. There doesn't seem to be anything linear about it. Maybe, if we had a better idea how the brain sorted and stored things, we could figure out how to improve on it. Especially if my brain manages memories the way I manage my desk and files (it isn't pretty).

But imagine if the multiple worlds theory was true and then imagine you could sample all of the possibilities before you committed to one path. It could eliminate regret. You could orchestrate the ideal state of existence. Of course, it would theoretically take forever because an infinite number of possibilities is a heck of a lot of possibilities. And it does seem kind of a wishy washy approach to experience. Who says what the right path truly is?

Apparently the brain. And I don't know about you, but I'm not always sure mine knows what it is doing all the time.