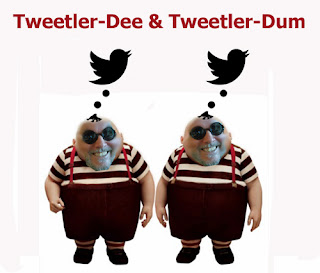 
It's kind of the same problem I have with my blog. Since I don't really have a single topic I post about, it's hard to attract a consistent audience. Very few people follow me on Twitter because they want to stay up to date on happy clams, my theories on quantum physics or rants about Donald Trump.

Ok, I still only have 1,077 followers. And I rarely get any likes or shares. So I'm not a major player on the Twitter channel.

But now I've started retweeting posts I either find interesting or stupid and I add my own commentary. That's where the Tweetlering comes in. I'm like this annoying guy in the back of a comedy show trying to one up the comedian with my own one liners.

And I somehow find it satisfying.

But still, it hasn't rocketed me into an overnight media sensation like that Bone guy who asked a question on the second Presidential debate and all of a sudden he is doing the late night talk show circuit. What's up with that?

Oh well, what else to I have to do anyway. #wastingtime #toomuchtimeonmyhands #isthisthingon
Posted by Time at 3:21 PM

"the odds of someone reading my blog is pretty minuscule" – even smaller.