Clickbaiters are the new spammers 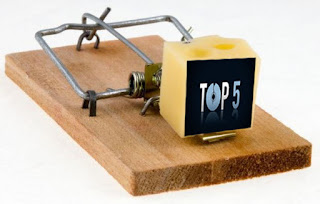 click·bait
/ˈklikbāt/
noun informal
(on the Internet) content whose main purpose is to attract attention and encourage visitors to click on a link to a particular web page.

I am struggling to stick to my resolution to not succumb to the siren song of clickbait. This is particularly difficult on Twitter since the primary purpose of most tweets is to get you to click on them. Facebook is not much better. Though I have blocked some of the worst offenders from my news stream. For awhile there I was constantly being pulled into tabloid like headlines reading things like "Mother and toddler discover time machine in Walmart." Turned out to be a mother snaps a photo of a geriatric shopper dressed in the same outfit as her three year old.

Clickbait preys on that aspect of human nature that just can't help but open a container of cottage cheese in the fridge that is several months past it's pull date. It uses the same principal of newspapers like the National Enquirer to lure hapless shoppers to throw it in the cart at the checkout stand because they were dying to read an article about a boy trapped in a refrigerator who eats his own arm.


Clickbait also preys on your ego. I can't tell you how many online quizes I've taken because the clickbait taunted me with a claim that only 5 percent of the population could answer most of the questions correctly.

And I can't tell you how many times I've fallen for the clickbait that promises photos of how badly famous people have aged (and let me tell you that Val Kilmer isn't looking too good). Ironically, most of these types of clickbait don't even show you the aged celebrity you were lured into the site to see in the first place. But you don't know this until you've clicked through 30 or so photos that load painfully slow. That is if you don't get suckered into more clickbait while you are clicking through the photos.

I know clickbait is designed to lure you to sites to expose you to advertising. But seriously, how effective is the advertising. I can't tell you the product for one single ad I've seen on the web today. And if I do recall the product I've seen on clickbait sites, I don't harbor any love for them after tricking me into looking at their ads.

And I'm a marketing professional.

But I believe that advertising can be produced and presented in such a way that it entertains and invites without be intrusive and obnoxious. Advertising can be done in ways that pair you with products you need and want as opposed to shoved down your throat by clickbaiters.