You take the high road and I'll take the circuitous road... 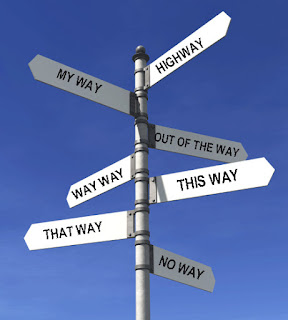 I started to write this post about how romanticism begins to wane the older you get and the more experience you've had. That got sidetracked as I meandered down memory lane recalling my own experience. Experience is the operative word here. Because being hopefully optimistic seems to be something that feeds a romanticized view of life. And experience tends to squash both hope and optimism.

Jaded perhaps. But pretty much true.

Or perhaps experience begins to create self-fulfilling prophecies that squash both hope and optimism. Regardless, I find it difficult to maintain a cheery attitude about things, especially with the current political realities.
In all fairness, even in my youth I wasn't overly optimistic. I think it was inherited from my mother's side of the family who were raised dirt poor and had very low expectations about life. I picked up very early what my station in life was supposed to be. And it wasn't uptown.

Though I did resist. Although neither of my parents had gone to college, And since they were struggling from paycheck to paycheck to take care of three kids, a college fund for me was out of the question. So I decided in grade school that I needed to get a scholarship and go to college on my own. I maintained a high grade point average. I participated in the kinds of school activities that college recruiters like to see.

It wasn't until I actually started applying to colleges that I discovered that full ride academic scholarships were as elusive as Big Foot. Full ride scholarships were reserved for athletes. And athletics was another area where genetics let me down. It wasn't for a lack of trying. I wrestled, played basketball and tennis. But whereas I could ace most academic tests, I was less than stellar in sports.

I was thrown a bone by several colleges, but I received only a token amount of scholarship money. I ended up at the state college in my hometown, eventually working two jobs (and 64 hours a week) to save enough money to finally transfer to a college out of Boise. I managed to finally graduate after two more years relying on a combination of basic grants, work study, a scholarship that I was begrudgingly given and a couple of student loans that were nothing compared to some of the loans students deal with today.

Although I graduated with a degree in Journalism it was only after changing majors several times (Psychology, English, General Business, and finally Journalism). And I graduated with honors (something no one but me has ever really cared about). Armed with my Journalism degree I entered the world of the newly graduated and newly unemployed.

I think I only applied for one job after graduation and that was to be a management trainee at the Bon (a department store that is now Macy's). For some reason I had hopes it would get me into the advertising department. I got a second interview, but didn't make the final cut. Who knows, if I had I might be an assistant manager of a Macy's in a mall in the burbs and teaching Millennials how to fold shirts properly.

It was a fateful phone call one morning about a month after graduation that sealed my career path. I had done an internship at a local public transit agency my senior year. I had essentially sorted slides and worked on a slide show script for a planning project that had a goal of eliminating the problem of buses getting stuck in downtown Seattle traffic. I needed an internship to graduate and the project needed free labor (I actually had to pay for the credits I earned for the internship and I didn't get paid).  Anyway, the people I'd done the internship for called me and asked whether I would be willing to come work for them for three months to help with the community outreach for the project.

Desperation made the offer seem too good to pass up. After all, it was only three months. Surely I'd find something else in that amount of time.

That was 35 years ago. Although my job titles have changed over the years, I am essentially still doing marketing communications for a public transit agency. And year after year I've told myself that some great new opportunity will come along and I won't be writing about buses and trains for the rest of my life.

I suppose there was a sweet spot somewhere in my career when I could have (or should have) quit and pursued something different. But honestly, part of me is a bit lazy. When you've done something long enough, it becomes comfortable and easy (easy in the sense that it is a known commodity versus something new and challenging).  And I started a family late in life. So the window for changing careers got stuck with just enough room to breath a bit but not enough room to jump out of.

It is not that I have a bad life. I have been gainfully employed for all these years. I have a family, a home, and we are comfortable. It's not as though I had a concrete plan for how my life and career would go. And at times I think that is a good thing. Because although I didn't plan to end up where I am today, it's better than aiming for something different and missing the mark.

I think that a lot of us did just what you did. I really can't complain about where I ended up. Life is good 😊