The devil is in the details

I generally consider myself an "idea" person. In an ideal world (i.e. mine and mine alone), I would sit around thinking of ideas and outlining them to a bevy of hovering assistants who would scurry away and implement them without question. Then they would return with praise for yet another brilliant success spawned from my brilliant idea.

But I unfortunately don't live in an ideal world (i.e. mine and mine alone). I live in a world of details. I don't get to sit around thinking. I don't have a bevy of hovering assistants who marvel at my genius. Instead, I'm surrounded by people who stand poised with a club ready to put most of my new  born ideas out of their misery not unlike Alaska seal hunters swarming a baby seal.


It has pretty much always been that way in my life. Because I have never been one to focus on the details. I have been known to go to work with one brown shoe and one black shoe on. 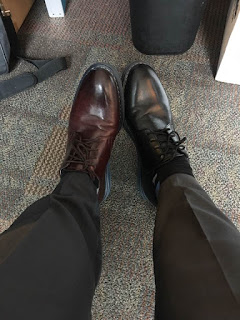 In my defense, it was on a day that the time changed and I was dressing in the dark.

It is fortunate I never pursued a career in engineering or coding. Because those niggling little details I neglect often determine whether a bridge falls down or a software glitch brings down an airplane.

Though I was a copy editor for some time which did require attention to detail. But not a lot was at stake. Very few people have been harmed by a dangling participle.

And don't ask me to assemble anything from Ikea. For some reason I always end up with extra parts and fasteners after putting something together. But who needs them?

I think people can get too bogged down in details. Social media is fraught with millions of people hung up on minutia, much of which is spewed out in 140 characters or less (though I think I'm now one of the privileged who has 281 characters). Perhaps instead of looking for more details, people should be looking for more facts.

Perhaps it's not that I am not a detailed person. Maybe I'm just impatient about too much information being shared. As I've aged and been inundated with information, I've grown to appreciate brevity and basics. When I ask someone how they are, I truly appreciate a simple, "fine" instead of a detailed description of their gastrointestinal difficulties.

The devil is certainly in those details.
Posted by Time at 10:45 AM