Out with the old grill, in with the new 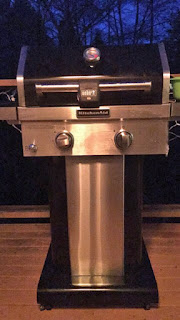 I got a new grill for Christmas. My old grill was about four years old and had all but fallen apart and was crusted with burnt remnants of meat that was also likely four years old. The grills had burnt through and the burners were riddled with holes.  So it definitely was time for a new grill.

But what do you do with a derelict grill? In the past, when I had a truck, I would have hauled it to the dump. If it was in better condition, I would have wheeled it out to the sidewalk and put a sign on it that read, "FREE." So I spent the Saturday before New Year's Eve dismantling it.

I had originally assembled the thing when I bought it. So I knew the number of parts and screws I would be encountering. But years of grease and being exposed to the elements had left most of the screws rusted and frozen. So with a hacksaw, my Dremel tool with cutting wheel and a pry bar, I proceeded to dismember my old friend.

It wasn't pretty. But I succeeded in breaking it down into chunks that would fit in a trash can (albeit it will take several trash cycles to get rid of the entire thing).


So I wheeled the new grill out of the garage and onto the deck. Fortunately, my wife had bought it already assembled. Reading the manual, I was grateful. There were 20 pages of diagrams describing how to put it together and maybe one dedicated to actually using it.

The electronic starter on the old grill had burned out a couple of years ago. So starting the burners on it involved sticking a lighter by the burner and turning on the gas. I lost a lot of arm hair in the process. All I have to do with my new grill is turn the handle and the burners light. It's a miracle!

Instead of flames shooting up wildly like my old grill, the burners on my new grill provide even, smooth flames in a civilized manner. The first thing I grilled was chicken. I was used to placing meat on the old grill strategically to avoid overly hots spots (and holes in the grill).  The new grill seemed to provide heat evenly no matter where the meat was. I turned the grill off, contented with my new grill experience.

The next morning I decided to clean the grill to prevent the build up of crap I'd had with the old grill. I opened the grill and looked at what had been shiny, stainless steel grills. They were crusted over with burnt sauce and grease from the chicken. The same was true with the heat shields covering the burners.

I spent the next hour or so scrubbing the grills and heat shields. I managed to restore them to almost new looking status. But it dawned on me that I'd gone through this process with the old grill and eventually gave up.  Would my new grill suffer the same fate?

One of the problems is there is no way to grill something properly without sauce, grease and mess. And you generally can't clean up right after you cook because everything is hot and you are busy eating the food you've prepared. But I don't have hours the day after to scrub grills and heat shields.

I tried looking up hints on the Internet for cleaning a grill, but they all basically say the same thing. Keep the burners on after you are through cooking for a few minutes to burn off the excess crude. Wait until grill is cooled down and then use a brush on the grill. I guess the only way to keep a new grill looking new is not to cook anything in it. 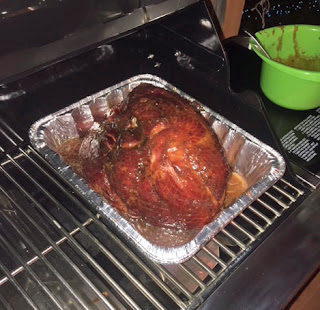 I did cook a ham on the grill on New Year's Eve. I kept the grill clean by placing the ham in a disposable aluminum foil pan and grilling it using indirect heat (turning off the burner under the ham and leaving the other burner on to cook the meat indirectly when you close the lid).  The only mess was when I splashed a bit when I was basting the ham.

The ham turned out great and I didn't have to clean the grill the next day.

You can tell by my first post of the new year that 2018 is going to be a grilling year.