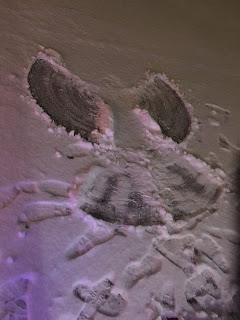 
My mother the Christian Scientist used to tell me that angels are god's thoughts sent to man. Christian Scientist's were never big on Christian tradition that included angels with wings. I compromised in my young mind an pictured angels as light.  Christian Scientists also don't subscribe to the red devil with a pitchfork image of Satan.  My mom told me that stuff most Christians attribute to the the devil was Error speaking. She actually meant error in thinking, but I always pictured "Error" with a capital 'E.' And the I pictured it as kind of a swirly creature made out of smoke. And it had eyes.

Being a Christian Scientist kid is not an easy thing. Fortunately, I outgrew it. Now I don't prescribe to any particular religious believe.

But I do believe in snow angels.