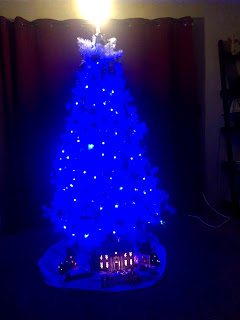 If you have been following my blog for some time (and god knows there must be thousands of you), you know that every year I decorate an all white tree with blue lights and nothing but Elvis related ornaments. It is a tradition that I started probably more than 25 years ago.

This year we are remodeling our house and the space where I normally put up the Elvis tree is under construction. So no Elvis tree this year. Sorry Elvis.

But this post isn't really about my Elvis tree or lack thereof. My wife and I were in a restaurant on Saturday night and there were a group of people seated at a nearby table. An older couple were dressed as Mr and Mrs. Santa Claus.  I assumed they had been at a party or working a party. But still, it struck me as odd that they would wear their Santa suits to a restaurant.

For some reason the sight of a table full of white people eating dinner with Mr and Mrs Santa Claus made me think how white of a holiday the secular Christmas is, especially in the small city I live in. It gave a whole new meaning to the term "White Christmas."

I had never thought of it that way before. I'd never considered that people of color had to put up with a white Santa, white Virgin Mary, white baby Jesus and white angels. This is all pretty ironic considering the event Christmas is supposed to be commemorating took place in a part of the world where I seriously doubt most of the people were white except for the Romans.

And Santa Claus really doesn't figure into the whole nativity aspect of Christmas anyway. He is part of marketing efforts to try and work a profit angle into the holiday. So as holiday spirited people think they are when they wear stupid Santa hats, they are really just feeding into the commercial spirit that really fuels White Christmas in the United States.

Don't get me wrong. I usually get caught up in the non-religious hype of the holidays myself. I'd put up lights, listen to Christmas music and decorate my Elvis tree (and a more traditional tree) all in the spirit of the holidays. Generally I would attribute it to being for the kids. But deep down, it gave me comfort because this is something I grew up doing. But even as a kid, I knew Christmas was something that was cobbled together from lots of different traditions from many cultures and beliefs. I knew that Jesus wasn't really born on December 25. It was just an arbitrary date that likely coincided with some holiday the druids celebrated when the Romans conquered them.

I knew as a kid that Santa didn't exist. But I put up my stocking and accepted the jumbo Sugar Daddy bar and boxes of Life Savors. I opened my presents and experienced the post present depression of being more enthralled with the thought of presents than the actual presents themselves.

But still I grew up with a White Christmas that reflected my privilege of being a white person in America. So now I can't listen to Bing Crosby or Elvis dreaming about a white Christmas in the same way anymore.