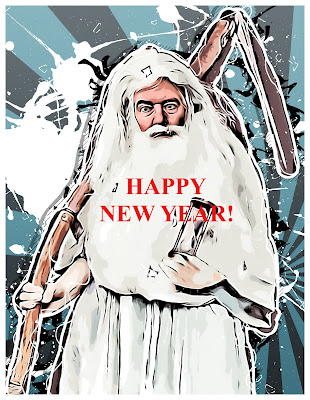 I am not sure why Father Time is depicted with a scythe. It makes him look like the Grim Reaper without a hood. A quick Google search tells me that a scythe "represents the unstoppable flow of time that will, in the end, cut down all living things."

That is a cheery thought.

My family stayed up last night to watch a life broadcast of the fireworks they set off every year at the Space Needle. It is Seattle's version of the ball dropping in Times Square. I say they set off the fireworks every year, but at the beginning of 2021 and 2022, they were virtual fireworks and light shows. This was the first year they actually had real fireworks since the pandemic. And they allowed people into Seattle Center to watch the fireworks.

I only saw two masks in a sea of hundreds of spectators. The television hosts didn't even have masks on. And they ended the broadcast cracking open a bottle of Champagne and guzzling it on camera. I thought that was against FCC rules. But hey, it was New Year's Eve.

They were kind of crappy television hosts anyway. One was host of Evening 5, a local human interest show that is broadcast weekly. He interviewed me years ago about an advertising campaign we were shooting at a local photo studio. It was themed "is you commute turning you into a monster" and featured classic movie monsters stuck behind the wheel of cars stuck in traffic. We hired a Hollywood make up artist to create the monsters.

Anyway we got the guy from Evening 5 to do a story about it. He didn't seem thrilled to be there and was a jerk during my on camera interview. When the story aired they had a few sound bites from me but never identified who I was.

Even then, on camera,  I was invisible.

I feel vindicated that the guy has to spend every New Year's Eve interviewing drunks at Seattle Center and I am watching in the comfort of my warm home.

The real fireworks were kind of a dud. They created so much smoke, you couldn't see the fireworks very well or the Space Needle. Oh, and this year they also had lighted drones that were programmed to write things in the sky next to the Space Needle. They would have been more interesting if they turned on the crowds like the drones in one of the last Spider Man movie I saw with my son.

The television commentators talked a lot about us being through the pandemic and back to normal. This was in between segments on the color of 2023 being magenta which coincidentally is the brand color of T Mobile, the sponsor of the fireworks.

I hate magenta. It is just pink with an attitude.

I do hope that 2023 is a bit more normal than 2020, 2021 or 2022. I have grown extremely weary of COVID variants that are given clinic names that are impossible to remember. At the very least they could use the same naming convention they use for hurricanes and give them names like Frida or Bob. The CDC could even sell the naming rights to people wanting to find just the right gift for their in laws.

I predict that in 2023 I will continue to be a marketing marvel.

Happy New Year to all of my loyal readers!

Hello, hello? Is this thing on?

So were you The Invisible Man in your monsters ad campaign?

I am the invisible man in all of my ad campaigns.