This is not my beautiful house... 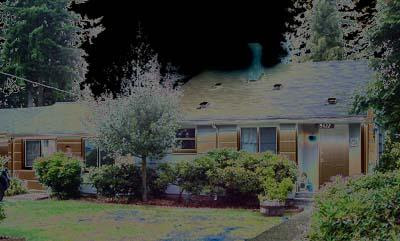 --Talking Heads, "Once in Lifetime"

There are strangers stomping through my house opening cupboards and flushing toilets. After 18-years of isolation, I find this a violation of my privacy. But it is unavoidable. We are selling it.

It is a helpless feeling though, scurrying out of the way as people evaluate your space and size it up for their own needs. Though, I walk from room to room and I don't really recognize it anymore. Tess transformed it into a model house, free of clutter and devoid of signs that anyone actual lives there. I find myself tiptoeing about afraid to disturb things or muss them for fear a potential buyer will shriek away in horror that a dustbunny has appeared.

The final agent passing through the house last night with a client turned to Tess and I and said, "You can tell this house has been treated with love." We smiled and nodded. When she left we broke down laughing. It's amazing what you can do with paint and spackle.

I bought the house in 1987. It was a VA repo. It needed TLC at the time, but it was structurally sound. I was a naive 29-year-old with amibition to transform the warts on my new toad into beauty marks. And, I was going to do it all by myself.

I stripped out the old green, shag carpet in the living room and two downstairs bedrooms that had been soaked with dog urine. The oak floors underneath were in relatively good condition (other than the urine stains). I rented a drum sander and a disc sander and set out to refinish them myself. That was when I discovered that refinishing a floor is one of the levels of hell. Refinishing a floor requires five passes with a drum sander with five different grades of sandpaper. It was uncharacteristically hot in Seattle that fall. Every time the drum sander would hit a urine stain, the stench would permiate my nostrils and make me want to toss cookies. And if you've ever used a drum sander, you know it's like steering an oil tanker. Plus, if you stopped with the drum engaged, you'd leave a nice divet in the floor.

After stripping and sanding the floor, I bought what I thought was a light oak stain. Like an idiot I pour it out in the middle of the floor without testing an inconspicous spot first. It was a dark walnut color. And thus the floors ended up very dark (except for the urine spots I'd tried to bleach out with wood bleach). Bottomline is that I know every inch of those floors and I'm aware of every blemish. So you can imagine my amusement as potential buyers pass through the house commenting on how beautiful the floors are and how unusual it is to see floors that rich, dark color.

I went through a few months of home improvement projects after I bought the house: quarry tile in the kitchen, new carpet in the family room, painting the interior and the exterior (another level of hell). I even tried remodeling the spare bathroom (I ripped out the green toilet with the padded toilet seat, the tourquoise linoleum and retiled the shower). The shower leaked so I abandoned the room.

After a couple of years of home repair, my enthusiasm waned significantly. You start to get complacent about holes in the walls.

It was only in the past year and a half that the home improvement kick returned. I knew that when Tess and I got married that the best thing to do was to sell our houses and buy something together that would be "ours" not his or hers. So we put in all new windows, paid someone to paint it, landscaped, had both bathrooms upgraded, put in new kitchen counters, new carpet and we painted the interior. And, as I wrote in a past blog entry, we made at least ten trips to the dump and an equal amount to Value Village to cleanse the house of my accummulated clutter. Plus you all know what I went through to get rid of the wood from the backyard.

So now the strangers are tramping through the house. And one put an offer on it last night. We accepted the offer and, barring any unforseen problems with the inspection it is sold. And we made an offer on a brand new house last week that was accepted. By the end of the month we'll be trading places and a chapter of my life will have ended and a new one began.

It's sad, but happy. It's exciting moving into a house that no one else has lived in. But it is odd leaving a place I lived in almost as long as the house I grew up in. And it makes me wonder if I'll leave the house just a little bit haunted with the ghost of my personality and 18-years of my emotions seeped into the walls. Maybe the new owner will be startled some time looking into the mirror and see my face staring back at her.

Or maybe I'll take my spirit with me and let it loose in our new house. But I know it will probably be a long time before I will be able to drive by the exit off the freeway I took for the past 18-years to get to my little house and not feel a twinge of nostalgia. And I'll hear David Byrne singing the lyrics to "Once in a Lifetime" in my head: "This is not my beautiful house...Letting the days go by...Same as it ever was, same as it ever was...."
Posted by Time at 5:00 PM

Hope it all goes smoothly. Good luck with the new house.

I also imagine that my spirit haunts my old homes (& trailers). It's hard for me to let go. I go back every so many years and see what changes have been made.. most for the worst. Make sure you describe your last night in the house to us.

I believe that places absorb the energy given off by the people who inhabit them. I also have a hard time letting go, though the older I get the easier it seems to get. That's a good idea about describing my last night in the house. I'll do that. Thanks!

Oh, and I enjoyed your lighthouse post and paintings (I just didn't want to leave a comment after reading the eclectic entry by ANON). I started collecting photos of lighthouses on our last trip to the Oregon Coast. They are a great symbol.

A new home? A stand alone or a town house? Sans yard?

The house would appear to stand alone. And no, it is not a Townhouse. It is a two-story, four bedroom, 2 1/2 bath suburban dream with a three-car garage and a fenced backyard. I can't wait to negotiate with Tess as to where the buffalo skull will go (I have a strong hunch that will be directly on eBay...sigh).

Don't hang your huevos on the wall man! It may cost you dearly but sometimes it's important during negotiations to convey to your partner how important it is for self expression to take priority. The house belongs to both of you after all and fair is fair.

On that note I've noticed my "boobie mug" collection has recently been obscured from public consumption and admiration. I'll have to rectify that.

I've been considering building a straw-bale home. My wife is lukewarm on the idea at best. At least her reaction to the straw-bale construction is more positive than her response to my geodesic dome home plans.

The spanish word for commitment is "compromiso." Coincidently it looks and sounds very much like the English word "compromise."

Good luck with your boobie mug collection. Let me know how much you get for it on eBay.