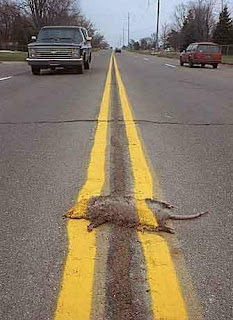 If you meet the Buddha, kill him.
—Linji

My interpretation of this Koan is that you should never real trust anyone who tells you that they are an authority, guru, expert or Messiah. A more spiritual interpretation would be that anything outside of yourself that presents you with the meaning of your life is an illusion. Regardless, I have never really trusted authority or people who claim to be invested with authority.

Anyone observing my life would probably not get the impression that I overtly question authority. I was always a model student and did everything teachers asked me to. But I didn't do this because I believed in their authority as much as feared their belief that they had it over me and would demonstrate this with a paddle (they still spanked kids when I was in school).

It also seems a contradiction that I get particularly belligerent when people ignore "don't walk" lights or fail to signal when they turn or change lanes. But I don't consider what they are doing as questioning authority. They are being arrogantly stupid (or stupidly arrogant). My thought when someone walks across a street against a "don't walk" light is that they share the same DNA as an opossum and are too stupid to realize that they are no match for several tons of steel travelling at 35 mph. But hey, why should laws of nature apply to them?

Which reminds me of a joke: Why did the chicken cross the road? Answer: To show the opossum that it could be done. Although they aren't real adept at crossing roads, opossums do smell quite nice. I know this because I attended a conference in San Diego years ago that included a lunch at the San Diego Zoo. During the lunch, a zoo keeper came out with a baby opossum and pretty much forced each one of us to smell it before we could eat. I think it was some California thing. Anyway, it smelled pretty darned good.

I also don't think people who do not use their turn signals are rebels ignoring laws to question authority. They are lazy idiots who don't have the courtesy to warn me before they are going to cut me off. Whoops, I am being negative again and turning off potential readers of my blog. What I meant to say was that people who don't use their turn signals are positively lazy idiots. And I mean "lazy idiots" in the best possible of all ways.

I realize that law enforcement people have a difficult job, but I have to say I question a person who voluntarily wants to go into law enforcement. Because I believe that if you actively seek to have authority over other people, you really shouldn't be trusted with it. The same is true with politicians and the people who make and interpret laws.

And don't get me started on religious authorities and their getting authority from the highest authority. That takes us right back to killing the Buddha if you meet him.
Posted by Time at 2:49 PM