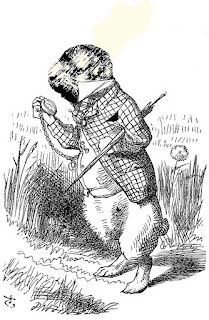 When I find one of your stinking holes,
I'll get up and tell you where to go
And you've just stripped all of my trees of bark
How do I stop you digging down below,
Go ask Wikipedia, I think they'll know

Incidentally, Jefferson Airplane became Jefferson Starship in 1974.  But I digress.

I didn't even know a Mountain Beaver existed until June of last year when I encountered one in my back yard. And after about two and a half months of dumping used kitty litter into his burrow and filling up the entrances, I think he may have actually moved on. I was working in my back yard yesterday and there was no sign of any new holes and he hadn't unplugged the ones I'd covered up.

Of course, he may be playing opossum and trying to lull me into a false sense of security. I wouldn't put it past him. Though if he is just playing opossum, I hope he tries to cross the road like one.

Don't you just love the way I keep weaving these threads of random ideas into a full-blown tapestry of covoluted thought?
Posted by Time at 9:57 AM