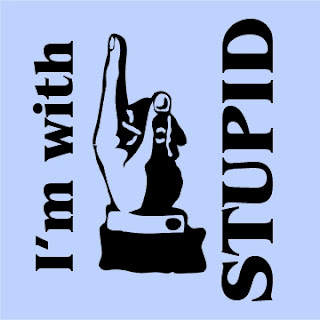 The heck with news about the economy, war and disaster, I honed in on breaking news on Yahoo about  a "Man with incredibly weird name arrested in Wisconsin." Now granted, the man, Beezow Doo-Doo Zopittybop-Bop-Bop, did have a stupid name. But it wasn't as if it was given to him. He changed it from Jeffrey Drew Wilschke.

The man was arrested not because he had a stupid name, but for being drunk, possessing drugs and carrying a concealed weapon. But the real stupid thing about this stupid story was that the journalist (and I use this term loosely) goes off on a tangent about a study out of Canada that shows people with stupid names don't do well in life.

I would have never read this story if it hadn't have popped up on Facebook as an article my nephew had just read. So I have to marvel at how the Internet has truly changed my life. A few years ago I would have had to had read about this while standing in line at the supermarket staring at the headlines on the National Enquirer. But I might have missed it even then while being distracted by a story about a boy trapped in refrigerator eating his own arm or a photo of Elvis appearing on a meat locker in Australia (happy belated birthday BTW to Elvis wherever you are).

Speaking of stupid, I wonder what Harold Camping is up to these days.
Posted by Time at 9:32 AM

This post is full of awesome. I read the same article and was shocked for lack of a better word. Shocked to learn that one can change their last name to Zoppity-bop-bop-bop and NOT turn out to be an awesome human being! That last name is what a child's dreams are made of, and one man had to go and ruin it all... ;)

I believe the name is actually Zopittybop-Bop-Bop, not Zoppity-bop-bop-bop :) Having grown up in Idaho, I would not have survived long with that name.

That's going to be an awesome headstone.