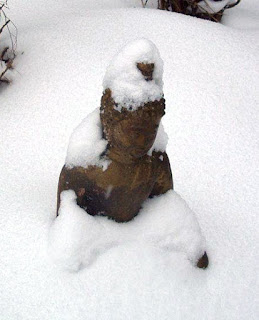 Some would say the Buddha is meditating on the state of enlightenment. I kind of think he was wishing he was in Hawaii instead of in my back yard. I know that is where I wished I was. Well, maybe not Hawaii. Maybe some place in Mexico or the Caribbean. I don't mean to diss on Hawaii, but I wasn't overly impressed when I visited there several years ago. Apparently the Aloha spirit only applies to mainstream tourist parts of the state. If you wander off the beaten track you risk being beaten by the locals who pretty much resent everything about the tourists but their money.

Two days of snow has fallen and is now in the process of melting. And melting snow is about as depressing as a Christmas tree the day after Christmas. It has lost most of it's appeal.

I stayed home the second day of the storm. It snowed the entire day. Fortunately we didn't lose power so we stayed relatively warm except for the hour or so we ventured out to play in the snow and take a photo of the Buddha hunkered down in a snow bank. My kids were thrilled. Though it wasn't the good kind of snow that you can bring a Frosty to life from. This snow was powdery and icy.

After several hours of sitting inside watching children's video tapes and breaking up fights, cabin fever began to set in. I began to really understand the Donner Party.

There is a certain irony in the fact that we feel trapped and isolated when we can't jump in our cars and drive to the local supermarket. Forget that we have telephones, the Internet, television, DVD's, MP3 players and countless other diversions. Human nature is to dwell on the one thing they can't do in a sea of choices.

I would not have done well had I been born pre-20th century.

To show my independent spirit, however, I fired up the grill and cooked steaks and chicken on my deck. Fortunately the snow had stopped falling by that time so all I had to contend with was the freezing temperatures and my kids throwing snow at me while I turned the meat.

But now I am back in the office watching the aftermath of the storm melting and morphing into gray slush on the streets below. Hopefully this will be the only snow storm of our winter in Seattle.

But again, at least we don't live in Chicago. What would we have to talk about except for unseasonably warm weather if it wasn't snowing.

Surprised by your weather reports. I thought it was only the UK that couldn't cope with snow.