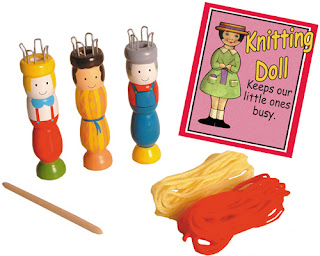 Someone gave my daughter a small knitting doll for her birthday in October. It was an odd little wooden spindle thing that had metal hooks on top that you wound the yarn around to theoretically knot things. The instructions were vague at best and there was no way my five year old was going to figure them out (especially since she can't read). So I set out to master the damned thing.

After several failed attempts, I was rewarded with a tube of knitted yarn shooting disturbingly out of the bottom of the doll. The useless instruction provide no information, however, on what you are supposed to do with the knitted tube once you produce it. So cool as it was to knit something this way, it left me curious about how one actually knits something with real knitting needles that don't involve yarn shooting out of a wooden doll's butt.

So I bought myself a "teach yourself to knit" kit and began to teach myself how to turn a ball of yarn into something useful. Fortunately the instructions were a bit better than the ones for the knitting doll that poops out yarn. I sat down with my needles and a ball of yarn while I was in the playroom watching my children and started following the lessons in the book that came with the kit. I felt pretty smug when I "cast on" the first few stitches. It took me awhile to realize that this was only the prelude to knitting. The next lesson was actually learning the "knit" stitch. This was followed by the "purl" stitch.

For days all I did was practice casting on, knitting and purling. Finally I took the plunge and started actually knitting something. And the simplest thing to knit seemed to be a scarf. So that's what I'm doing, knitting a red scarf for my 5-year old daughter because she wanted a red scarf and she is very forgiving when it comes to what it will look like when it is finished.

I have been working on it for about a week now. And although my speed is picking up as I work on it, I still don't anticipate it will be done for a couple of months. But I have to tell you, as unmanly as knitting a scarf sounds, it is a pretty therapeutic activity, especially when you are doing something like watching your kids fight or watching television.

I watched the NFC and AFC championship games yesterday while knitting and the irony of watching football and knitting did not escape me. Though I remember watching football great Rosey Grier on talk shows openly confess that he knitted in his spare time. And at the time he was a pretty hefty and aggressive lineman. So that gives me some cover.

I also knitted while I was watching the first episode of Spartacus, Vengeance on Starz last night. And if you aren't familiar with the Spartacus mini-series, it is about as violent and pornographic as you can get on mainstream (albeit premium channel) television. The only real downside to knitting and watching football of gladiator shows is remembering whether the last stitch was a knit or a purl. But in the long run, my daughter won't know or care.

Once I've completed the scarf, I may tackle knitting a hat. But I'll probably have to knit another scarf. When my 3-year old son saw I was knitting one for my daughter he demanded I knit him a blue one. Maybe I knit one for his birthday. That will give me about a year to work on it.
Posted by Time at 2:58 PM