May Day, May Day! 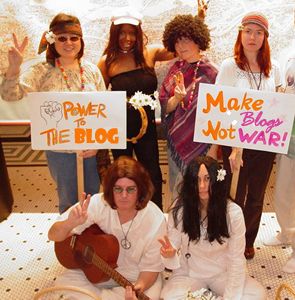 I understand that May Day loosely became associated with labor protests in the late 1800s, but I don't understand why it has now become a lightening rod for every fringe cause there is and the centerpiece for their protests are marches aimed at screwing up traffic. Even if I wasn't an experienced marketing person I would put two and two together and realize that making sure people sit around for hours stuck in traffic isn't the best way to win their hearts for your cause.

I also don't understand the costumes people who march in these protests wear. I passed three people sporting butterfly wings who I assume were heading to the park where Seattle's protests were scheduled to begin in. At least I think they were headed for the protest. I do work on the border of Seattle's Pioneer Square and International District neighborhoods and people wearing butterfly wings isn't really an unusual thing to see on any given day. But these three looked like they were headed somewhere with a purpose, so I'm pretty sure they were socialist/communist anti-capitalist anarchists of some kind and not the usual colorful crack heads I see.


When I was kid, I celebrated May Day by making paper May Baskets at school, filling them with flowers and hanging them on the door knob of my grandmother's house next door and our house for my mother (who incidentally would chide me for cutting the flower stems two short after thanking me for the flowers...I think this is where my lack of enthusiasm for constructive feedback began).

This innocent custom of celebrating May Day with flowers has largely fallen by the wayside in the interest of the larger political statement driven protests. And since they have been going on since the late 19th century, we all know how effective they have been in driving social change.

I have a hunch the protests are an excuse for many people who really don't have a clue what they are marching for to mess around and feel like they are sticking it to the man with a minimal risk as long as they are not in the front of the march if things go sideways.

Personally, I have never been much of a group protest sort of person. I don't like crowds or crowd mentalities. My idea of protesting is writing a snarky e-mail to United Airlines because they load the back of the airplane last instead of first. And it is just as effective as the people wearing butterfly wings marching around with raised fists in solidarity for god knows what.