My name is not Steve 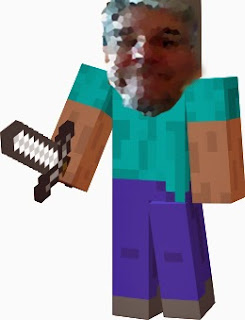 Okay, if you are older than 12 or don't have children older than 12, you probably have never heard of Steve or Minecraft. It is a video game available on PC, X-Box and Android that allows you to enter multiple worlds, and create your own environment while battling Mobs (short for mobiles who are really bizarre monsters like zombie pigs and creepers). You also mine for minerals that you can craft into tools and rocks that you can craft into buildings (thus the name Minecraft).

The main character in Minecraft is named Steve, though you can change his name to anything you want. Steve starts out in whatever environment or "biome" the game randomly generates with nothing but his bare hands. He has ten minutes of daylight before the mobs begin spawning and trying to kill him. In that ten minutes, he needs to try and find the right materials to craft a weapon to defend himself against the mobs or create a shelter to get him through the night that descends quite rapidly. The good news is that the zombies and skeletons with bows and arrows catch on fire in daylight. The bad news is that the Creepers (monsters who rush up to you and explode after an annoying amount of hissing), giant spiders and Endermen don't.


If Steve makes it through the night, he begins crafting more and more weapons and tools. He also can kill the random sheep (unless he has crafted sheers, but he would have had to find iron, smelt it first) to get enough wool to craft a bed that allows him to sleep through the night in relative safety.

You can play Minecraft in Survival mode (where everything but mumbling villagers and farm animals tries to kill you) or creative mode where all you do is build things (boring). If you have friends on the same network playing Minecraft, you can enter their worlds and either help each other or try to kill each other. Though there is really no consequence in dying in Minecraft other than you lose all the stuff you picked up before you died (which is kind of like real life). Because you simply hit a "respawn" button and you are born again in the world you died in to try and get it right this time (a very Buddhist outlook).

Why do I know so much about Minecraft you ask? My young children begged me to buy the app for their Kindle Fires because they knew kids at school who were obsessed with Minecraft. Because that is the general effect Minecraft has when you play it. You obsess about what you are going to build, find or run from.  Once the kids started playing it, they began reading books about it (or having me read them books about it).

Then they started watching YouTube videos about Minecraft. In particular they began obsessively watching videos by a young English gentleman named Joseph Garrett whose Minecraft name is Stampy Cat.  Just to show you how obsessive Minecraft players and people who watch videos about it are, Garrett's YouTube channel was one of the tenth most viewed in the world in 2014. And all the videos are about is Stampy Cat narrating while playing Minecraft or displaying his creations in Minecraft.

For the life of me, I couldn't understand why my kids would spend more time watching Stampy Cat play Minecraft than actually play it themselves. I still don't.

After reading umpteen secrets of Minecraft books including a litany of Minecraft fiction that has taken hold on Amazon (series like "Secrets of a Wimpy Steve" and even a few based on Stampy Cat) I finally decided to enter the Minecraft world on my own Kindle Fire. And as silly as it sounds, I now understand why people get hooked on it. Now granted, it is generally people who are still in Elementary School, but I'll be damned if it isn't like crack for my OCD brain.

The real plus about me becoming a Minecraft freak is that I can now spend more quality time with my children, albeit in a virtual world where my son is randomly pushing me off buildings or killing me with a stone pick axe and taking all of my stuff. But we have really bonded over Minecraft and every night before bed my son asks me if I have any questions about Minecraft he can answer for me because he is pretty much an expert.

My conclusions about why Minecraft is so addictive to people is that it provides a sanctuary where they are pretty much in complete control of their environment (other than the zombies, skeletons, Endermen, Creepers and giant spiders trying to kill you). You can build these fantasy fortresses and uncover vast caverns with potential treasures. And it is pretty infinite, or as infinite as the battery life of your Kindle.

I imagine for kids in particular it provides an escape from a world of adult rules and parameters. And it provides an outlet for facing your fears, especially if your fears include zombies, giant spiders and skeletons shooting arrows at you. It is also a game with parameters, but no real rules. This gives creative minds free reign to explore and create untethered by the normal barriers of society.

Eventually I will probably grow tired of Minecraft as I have Candy Crush and Angry Birds. But in the meantime I'm pretty content with the bitchin' sanctuary I've carved out of a virtual mountain and my new set of iron armor.

But I'll never get used to the giant spiders.
Posted by Time at 1:58 PM

Stampy Cat and Squid's voices ring through my son's bedroom as he watches you tube, whilst simultaneously building high rise tree house cities, and cooking squared off cows.... He and his friends invent worlds together and battle foes; whilst I stand looking on in total bemusement.....

Ahhh...how could I forget Squid? I play Pocket Edition, which doesn't require you to eat to survive. So although I've killed a few of the squared off cows, I only do it for the leather which has no real purpose other than making boots or leather armor (which is also useless). Isn't it sad that I know all of this?