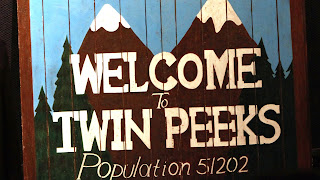 
But this post isn't really about how Kyle MacLachlan and I are similar and dissimilar. It's about the release of a limited number of new episodes of Twin Peaks by Showtime.  The revival peaked my interest (ha ha).  But since I hadn't watched the series when it originally aired, I decided to binge watch it before watching the new episodes.

I was vaguely aware of the plot. I remember going to parties in the early 1990s and watching groups of people excuse themselves when it was time for an episode of Twin Peaks to air. I knew about the murder of Laura Palmer and the log lady. But that was about all. Oh, and I somehow ended up with a cassette tape of the soundtrack that I listened to over and over while at work at the time.

After a few episodes, I was hooked. It helps that I am a big David Lynch fan anyway. I loved Dune and Blue Velvet, both Lynch films that starred Kyle MacLachlan.  I love Lynch's quirky punk film noir style. He encourages actors to overact in a great campy way that makes you smile instead of wince. He has that same knack that Jim Jarmusch has of exposing the underbelly of seemingly normal locals.

In short Twin Peaks is just about a bat shit weird as you can get. I finished the final episode of the second and final season of the original Twin Peaks last night. It's ending left me unsettled and vague confused, yet wanting more. If I hadn't known there was a revival of the show ready to watch I would have been a pit pissed as well. Because nothing was really resolved. I imagine this was in part because the series was cancelled, but I kind of think part of it was by Lynch's design.

In the final episode, Agent Cooper has entered the Black Lodge and encounters a variety of odd characters including a few who were killed off earlier in the series. The doppleganger of Laura Palmer prophetically tells Cooper they'd meet again in 25 years. And low and behold here it is 27 years later and the series returns.

I started watching the first episode of the revival and so far I am not disappointed. Lynch jumped right back into the weirdness without giving you a breather or a recap. Many of the original cast have returned for the revival and I have to admit it is a bit like attending your 30th or 40th high school reunion and gasping in horror at how much everyone has aged. Except for Kyle MacLachlan. Other than a few stray wrinkles, he, like me, hasn't changed a bit.

Can't wait to see what other miracles await me in the rest of the episodes.

Suddenly I feel a strong urge for a slice of pie.