I want my MTV 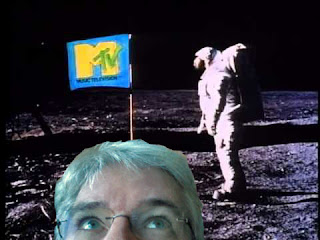 
I miss MTV. Oh, I imagine it is still around, but it can't be the same as it was when it launched back in 1981.  I had high hopes for it back then when I was 23 and had high hopes for lots of things. They mainly played music videos introduced by Video Jockeys (VJ's).

Music videos were unique back then. It added a whole new dimension to music. The videos added a visual storyline to the songs. It turned the singers and bands into screen stars. I really liked videos like Mexican Radio by Wall of Voodoo (I wish I was in Tijuana, eating barbecued iguana).

And there was Devo (Crack that Whip), Billy Idol (White Wedding), Cyndi Lauper (Girls just want to have fun), and Corey Hart (Sunglasses at Night). The stars didn't last long, but their videos are still etched into my brain.

It is hard to describe why music videos were a game changer at the time. I'd grown up listening to vinyl records and the radio. I loved the music, but it was one dimensional. Oh, there were some artists that had created things akin to music videos before. The Beatles had movies that bridged the gap between the songs and the performances (Hard Days Night and Help).  And there were the Monkeys who were a fictional band created for a television series in the late 60s.

But music videos seemed like the music vehicle of the future. I liked that MTV treated music videos like visual records and even had top 10 countdowns. I think the VJ's were even former disc jockeys. 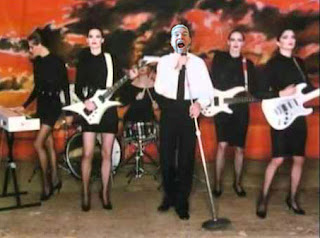 Some videos like Robert Palmer's Addicted to Love were simple but iconic. It's hard to forget Palmer's backup band of highly made up models in black, skin tight mini dresses moving slowly to the beat of the song, their faces devoid of any expression. I remember going to costume parties where women came dressed as those models.

I realize MTV wasn't all great music videos. I was never a big Pat Benatar fan. Nor did I care for Duran Duran or Flock of Seagulls. Twisted Sister was a bit much, too. Eddie Money was okay.

But overall MTV opened up a new medium for music. And in the beginning there seemed to be a lot of creativity and experimentation.

I don't watch MTV these days. I don't know if music videos are a thing anymore. I do pull up videos on YouTube now and then. There seems to be a lot of videos made in more with the artist walking barefoot on a beach, driving aimlessly on an empty highway or twirling in around in a desert or forest.

In hindsight, I suppose I'm nostalgic about MTV because it reminds me of being in my early 20s and feeling like I was perched on the edge of a new era with a future so bright I'd have to wear shades.

Sorry, I couldn't resist throwing that Timbuk 3 lyric in there.
Posted by Time at 4:14 PM