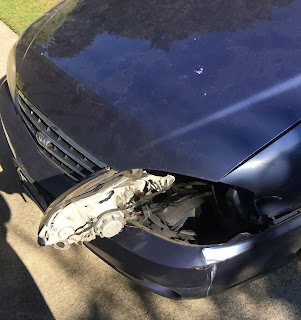 I have worked in public transit for 36 years. I take public transit to work every day. I ride it to the airport when possible. But I still have to deal with owning a car.

And I've never had much luck with cars.

I got my driver's license when I was 14. Idaho allowed kids that young to drive because many needed to drive farm equipment.

By the time I had a driver's license, my parents owned a 1967 Chevy Bel Air and a 1972 Chevy truck.  Those were my driving options.

Since my dad rode his bike to work, he would sometimes let me drive the truck to junior high. It gave me some clout with the girls I had crushes on to be able to offer them rides home after school. It didn't give me enough clout to actually date any of them. Not that I could have driven anyone anywhere on a date. Though I had my driver's license at 14, you couldn't drive at night until you were 16.

I did eventually get a permit to drive at night on a specific route when I turned 15 and needed to drive to marching band practice. That's when I got in my first accident. It was while driving the 67 Chevy. An old lady ran a stop sign and t-boned the car.

By the time I was driving at night without a permit at aged 16, I drove the same 67 Chevy into a metal pole at the band room while trying to turn into a narrow drive way and drop off a bass guitar amp. It dented the front fender.

When I was 17 or 18, I bought my first car: a 1965 Oldsmobile Cutlass F-85. It was white with a red top and red bucket seats. It was a classic, but it was a boat. If I'd held onto it and taken care of it, it would be worth thousands today. But I traded it in and bought a 1973 Toyota Celica.


The Celica was red that quickly oxidized to a dull orange. It had a manual transmission (my first since driver's training). So my early trips in that car were a bit jerky. I ended up driving the Celica for several years. It went through a lot. I got driven off the road by a snow plow near Idaho City one year. The snow plow pulled me out of a snow bank, but bent a stabilizing bar. That caused one of many trips to the repair shops for that car. I think I went through a clutch or two, an alternator and regulator as well as a new fuel pump during the life of that car.

The Celica was rear ended while I was driving across the 520 Bridge. I used the $700 insurance settlement to go to Disney World in Orlando instead of having the body repaired. Eventually, I traded in the Celica for a silver 1979 Honda Prelude. It got hit by someone while I was attending a concert in the University District. They left a note on the windshield saying they were sorry and left a phone number. The number turned out to be fake and I didn't get the dent repaired.

I traded in the Prelude on a  champagne-colored 1988 Nissan Pulsar with T-tops. It was my first brand new car. It was sporty, fun to drive and although a pain to take out and put back in, the T-tops were kind of cool. If you don't know what a T-top is, it was kind of a trendy version of a hardtop convertible. The roof panels could be removed and stored in the back hatch of the car.  You could remove one or both depending on your mood and the weather.

The Pulsar lasted about 16 years and several trips to Boise. I had one accident in it. I was hit while driving across a street after waiting at a stop sign. It was the only accident I had that was technically my fault. I had crossed that street hundreds of times. I just didn't see the car coming this time.

I traded in the Pulsar on a brand new black Nissan Frontier four-wheel drive pick up truck. I loved that truck. It wasn't too big or too small. I could haul stuff without a visit to U-haul. I could go to Home Depot and buy big stuff without worrying how I was going to get it home (I still have nightmares about buying an old Sony 32 inch television and barely squeezing it into the back of the Pulsar after removing the box).

But I only owned my truck for maybe three years when I had to trade it in for a black 2008 Hyundai Santa Fe SUV. The reason? I had to have a vehicle that could handle car seats and babies.

Eventually my wife took over the Sante Fe and I ended up driving her blue 2003 Kia Spectra. It was a functional, no frills car with manual transmission. It didn't have power anything. You had to unlock it with a key and roll the windows down with a handle. I ended up with it after my wife had our second child and stayed home and eventually began driving the kids to school, dance classes, soccer and other things parents chauffeur their kids to.

The Santa Fe hasn't been the most reliable card. It's a magnet for rock chips and had the windshield replaced only to crack again. It has had to have new tires, umpteen replacement parts and just a couple of months ago we had to have the engine replaced to the tune of $6,000. I chose to replace the engine instead of buying a new car because I didn't want a car payment. This will prove ironic later in this post.

I didn't really mind driving the Kia. I rarely drove it anywhere but the train station a mile away from our house. It wasn't fancy, but it started most every time and it was paid for. Oh, it had a few problems. The door lock on the driver's side broke and for a long time I entered through the driver's side and maneuvered over the stick shift to get in the driver's sear. Then I ponied up $700 to the dealership to fix the lock. And there was that time the key broke off in the ignition and I had to wait hours for AAA to send a lock smith. He replaced the key and a few months later another key broke off in the trunk lock.

But up until last Monday, the Kia served me fine. And then when I walked to the parking lot at the train station Monday evening the left headlight had been yanked out of the front fender after being hit by someone pulling out of the spot next to it. At first I thought I was the victim of another hit and run but then I saw a business card stuck in the windshield. Ironically it was from a woman who works for the same company as me. She drives a monster red Ford truck. And while pulling out of the spot next to the Kia, she'd turned too soon and her rear bumper thrashed the Kia's left front.

There wasn't a scratch on the truck.

Without an, "I'm sorry," or "how's your mother," the woman phoned me the next day and provided her insurance information. Her insurance agency inspected the damage and determined that repairing the car would cost more than it was worth, so they simply wrote us a check for a few thousand and wished us good luck.

So against my will and through no fault of my own, I was faced with buying a new car and having monthly car payments. I decided to look at late model used cars and turned to the Internet. After a few days reviewing cars on the Carfax web page, I contacted a dealer who had a silver 2017 Nissan Rogue SUV with fairly low miles at a reasonable price. After several hours of sitting around waiting for my financing and assuring the finance officer that I didn't want the extended warranty I drove home with my fairly new car and a few years of car payments. 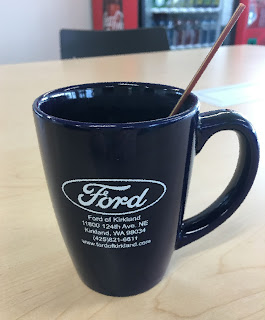 My son tried to convince me to take the Santa Fe and let my wife drive them around in the new car. But I explained to him that as appealing as it would be to drive around a car that had been puked in on more than one occasion, contained multiple years of food stains on the seats and had side windows plastered with almost a decade of stickers I was going to pass on that suggestion.

So now that I'm on my 7th car (I don't count the Kia since I didn't buy it), I wonder if this will be the last one I own. I'll be pretty close to retirement by the time it is paid off. And I am not one of those people who really likes driving anyway. Of course that problem could be solved if by then they've perfected self-driving cars.

In the meantime, I'm just hope this car had better car-ma than others.