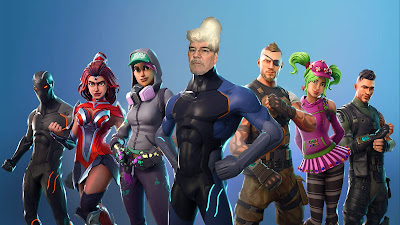 As with Minecraft, I downloaded the latest computer game craze, Fortnite to make sure it was appropriate for my son to play. He has been obsessing about it for months because all of his friends play it. We had resisted letting him download it because it does have shooting as a component of game play. But he eventually convinced us that the depiction of violence was minimal.

The premise of Fortnite is pretty simple. You log in and you are assigned a character (unless you have purchased a character skin of your choice in the Fortnite store). Near as I can figure the characters are assigned randomly (including the gender and race of your character).  And each character is a buff Millennial decked out in stylish combat gear. You can also purchase even more stylish garb if you are picky about your flack jackets and ammo belts.

Once you have been assigned your character, you pick the type of mission you want to go on. You can go solo, in teams of two or squads of four, or you can take part in a free for all with 50 players in each team. When you have picked you mission preference, the Fortnite servers assign you to a game with other players presumably from all around the country if not the world.

You are then propelled into the game world where you run towards a blue bus that is disturbingly reminiscent of the Magic School Bus. After a short countdown you are on the flying bus above the Fortnite world. Then, after another countdown, you skydive out of the bus and choose from a variety of locales to land on the island like Fortnite game field. If you are on a small team with players you know (such as my son), you try and land near to each other. You are in free fall once you jump out of the bus. You can deploy a hang glider whenever want. It automatically deploys once you are near the ground.

Once you land, you begin searching for items to help you survive. You start out with a formidable pick axe. You can use it to hack down trees, break rocks or destroy buildings (much like Minecraft). You then search through abandoned buildings and houses for items to put in your pack. Most of these items are weapons (handguns, automatic rifles, shotguns, machine guns, grenades, and booby traps). You can also pick up medical supplies and potions you drink to increase your power or shield you. There are also treasure chests hidden in random places that have a cache of items. And random as it seems, you can find a llama pinata that contains a stash of items as well.

Once you have a gun, you pretty much shoot at anything that moves before it shoots you. To add to the anxiety, a storm that drops acid rain begins forming minutes after you land and you have to track your location on a map to make sure you stay within a shrinking circle that is out of reach of the storm. The game ends when you either die or are one of the last survivors of the winning team (the one with live players left).


There are many things I like and dislike about Fortnite. I like the fast pace of the game (though I tended to die within seconds of landing umpteen times before I figured out what I was doing). I dislike the business model that subconsciously tricks kids into buying trendy character skins, clothing and weapons as a status symbol in the game. I also dislike that you can't pick your character. I'm all for gender equality, but I still feel weird to be playing as a voluptuous combat Barbie. Even when I'm given a male figure, it looks like it has spent most of its time at a gym and hair salon.

These characters can't be good at teaching positive body image attributes to kids. I can pretty much guarantee that none of the people playing the game look anything like the characters. I realize that if the game designers made the characters look like real gamers, no one would want to play, but they really need to tone down the Hollywood hero look.

That aside, Fortnite can be kind of addicting. It has also provided some bonding time with my son. He has starting asking me to play it with him after dinner. And we play as a two-person team. It is kind of touching to be able to follow my son around the Fortnite world picking up weapons together and trying to avoid getting shot. I sort of have his back. I just haven't totally got the knack of aiming the stupid guns and hitting anyone before they kill me. I am becoming adept at running away and hiding.

Fortnite allows team members to come to the aid of their wounded team mates and heal them with the medical supplies they've picked up. My son's character got wounded on one mission the other night and he asked me to help him. I went back through the carnage and saved him.  We were then both attacked and I was wounded. He ran as fast as he could for cover and left me to die.

It got me all misty eyed. Fathers and sons don't get to experience that kind of thing in the real world.

At least I know where I stand if he and I get in a fire fight.
Posted by Time at 1:35 PM