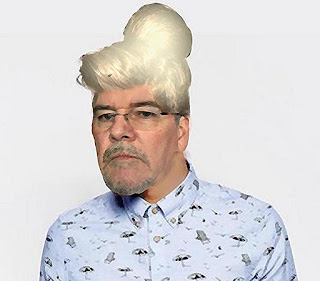 The event included a slide show on screens in the meeting space showing photos of staff at work. I wasn't in a single photo and I've been working there 21 years.

I was overwhelmed by the feeling that not only had I become invisible as I'd aged, but now I wasn't relevant.

Not that I've felt relevant for some time now. It creeps over you in phases.  Though it isn't as obvious as becoming invisible. I started fading into the background when I turned 40. I was transparent when I turned 50. And I became completely invisible when I turned 60.

I still felt relevant at 40 because it was still possible to bridge the gap between generations and have common popular points of reference. This was due in a large part to not having much contact with  Millennials at the time since most of them were in grade school

Even when I turned 50 I felt more relevant than I do now, though more via my writing than in person. My hair had pretty much all turned gray by the time I turned 50. And it was that gray hair that made me transparent and less relevant to the world when I met people in person.

The milestone of turning 60 is the game changer both online and in the real world. Since I have made no secret of how old I am in my blog, I have sensed that my relevancy to the larger demographic that uses the Web has diminished exponentially.


I suppose I could lie about my age. I could curb my obsession with Photoshopping my face or things or just use younger photos of myself like people do on dating sites. I could write about trending things and drop the names of popular entertainers and musicians that Millennials listen to. But that would be the virtual equivalent to having a senior bro bun, wearing an earring and trying to get my garage band back together (not that I was ever in a garage band).


One of my dilemmas is that the demographic that can relate to my senior angst about invisibility and irrelevance either don't read blogs or don't want to be reminded of the drawbacks of becoming a senior citizen. And let's face it, if you are a Millennial or younger you don't give a shit about an old man ranting about getting old.

Oh, I talk to Millennials at work. One was describing some music group that used a kid's choir as backup for a popular song. I asked her if she had ever heard of Harry Nilsson. She stared at my blankly. I tried explaining that he was a singer/song writer who had recorded hits like Everybody's talkin' and Without you. He was a good friend of John Lennon. She still stared at me blankly. So I just explained that he had recorded a song on one of his albums using a choir from a senior home. The song was I'd rather be dead and included great lyrics like, "I'd rather be dead than wet my bed. I'd rather be gone than carry on." The Millennial smiled and suddenly realized she was late for a meeting.

I suppose I could join one of the senior rights groups like the Gray Panthers or AARP, but you know, I'm not a big joiner and hanging out with all of those old people comparing blood pressure medications would be depressing.

I guess I'll start growing out my hair so I can work on my bro bun.
Posted by Time at 4:12 PM