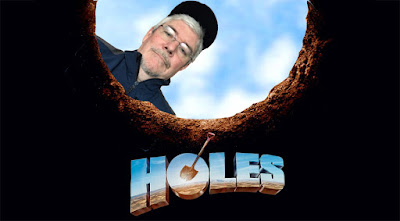 "The only job you start at the top is digging a hole."

I don't dig digging holes. Not that I dig that many holes. You tend to only dig holes if you have something to put in one.

That said, I dug two fairly large holes over the weekend. I didn't start out to dig holes. But when you own a home and start doing chores, one thing leads to another.

I set out to mow the front lawn. It is a narrow strip of grass maybe eight by thirty feet. It takes more time to get out the mower, extension cord (it's an electric mower), broom and trimmer than it does to actually mow the lawn. While mowing the lawn I noted for the thousandth time that, for whatever reason, there were two sunken areas in the lawn. They were on either end of the lawn and were maybe a foot and a half each in diameter.

The thing about these sunken areas is that you can't really mow them. The mower passes right over them and the grass growing in them doesn't get cut. I always have to come back with the electric trimmer and trim the grass. Then it looks funky.

I finished mowing and edging the lawn and decided it was time to do something about the sunken areas. I figured I cut up the sod over the indents, fill them with soil and put the sod back.  So I grabbed and edging shovel and began cutting the sod on the first sunken area. It went fairly quickly. I pulled up a large square of sod off the indent and set it aside.

That's when my wife walked up and told me once again how she would like to rip up all of the grass and just put in shrubs and trees. I nodded, thinking it would be nice not to have to mow the lawn, but also thinking it would be a new patch of earth for the horsetails and other evasive weeds to conquer. Then my wife suggested that rather than filling in the sunken areas with soil and covering them back up, we should plant a couple of trees to take us one step closer to her dream of a landscaped front yard.


So we drove to Home Depot and after inspecting the inventory of available saplings, chose a lime tree and a Weeping Pussy Willow tree. Both came in fairly large pots with instructions to dig a hole twice as wide as and as deep as the pot to plant the tree in. We brought the two trees, some fertilizer and some mulch home (no easy task in an SUV) and unloaded them in the front yard.

I began digging the first hole. Okay, it wasn't overly hard. At least the soil was fairly soft because of the multitude of underground springs that pass through our property and challenge our retaining wall and try to relocate our back deck to the stream that runs at the bottom of the slope behind our house.

But while I was digging the hole I thought about the act of digging. I remembered my father helping the neighbor years ago dig a well. They must have dug down a good eight feet before they hit water. So I was grateful I only had to dig a hole that was about two feet wide and a foot and a half deep.

And I know it sounds terrible, but I also started thinking about how much work serial killers must go through to bury bodies in their backyards. We're talking about digging a hole at least six feet deep and three feet wide. How do you do that without anyone noticing?  I seem to recall that serial killer William Gacy buried his victims in the crawl space under his house. How in the hell do you dig a hole in the crawl space under your house? I had some animal die in my crawl space in the first house I owned and I can just tell you the smell alone was enough to let you know you don't want dead things under your house. And I can assure you I didn't crawl under the house to pull out or bury what ever died there and there would be no way I would think of digging a hole in the crawl space.

Not that I have ever thought about being a serial killer. But I have to tell you the thought of having to dig a hole big enough to bury a body is enough to dissuade me of considering that vocation.

I am probably going to hell for thinking that, too.

I finished the first hole and after a bit of maneuvering and adjustment, we planted the lime tree.  Then I started on the other hole. It went fairly quickly. I didn't think about serial killers while I was digging this hole. I did think that I was grateful I am a marketing director and don't get called on to dig many holes (other than the ones I dig myself into) as part of my regular work week.

We planted the Weeping Pussy Willow tree without any incident.  As I put away my shovel and other tools, I had a new appreciation for people who work with their hands and do this kind of work all the time.

I also appreciate that I'm not one of them.