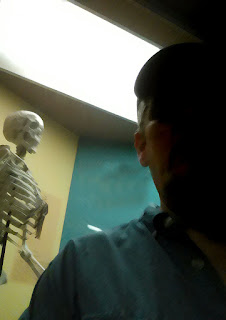 I've been binge watching Netflix's new series Dark Tourist. It is a documentary about a subset of tourism that involves visiting places that are historically associated with death and tragedy. New Zealand journalist David Farrier focuses on that area of travel, known as dark tourism.

Farrier travels to a different place in each episode, visiting destinations and have experiences that aren't on your typical travelers must see list. He visits a death-worshipping cult in Mexico, soaks up radiation left behind in Fukushima, Japan, meets vampires in New Orleans, and travels to Africa to become a Voodoo initiate.

On an even more disturbing level, he takes serial killer Jeffrey Dahmer tour with Dahmer-obsessed tourists and visits with Hollywood fans of Charles Manson. Oh, and he visits a place in Cambodia where you can shoot heavy duty military weapons and shoot cows or chickens.

The series confirms that humans are a disturbed lot.

I think the closest I've ever come to being a dark tourist was visiting the Ford Theater in Washington D.C., (where Lincoln was shot), the Kennedy museum in Dallas, the Civil Rights Museum in Memphis at the Lorraine Motel where Martin Luther King Jr. was assassinated. But I visited those places out of admiration of the men, not out of morbid curiosity to see where they were killed.

I find people's adulation of serial killers the most disturbing. I am also disgusted at the amount of media attention paid to the background of the people who carry out mass shootings. No one should be memorialized for being a killer.

I suppose if I was to psychoanalyze Dark Tourists, I'd say they are people afraid of death who go to these morbid places to confront their fears.

Or more likely, they are just whack jobs.