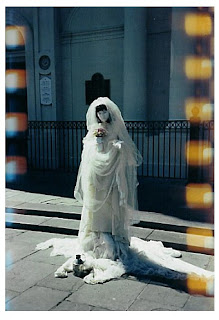 I spent my 41st birthday in New Orleans, by myself. It was an odd time in my life. I'd weathered the milestone of turning 40 and wasn't quite sure what to make of things. I didn't have a relationship. I was on a career path I wasn't sure I wanted to be on. I felt lost.

I'd been to New Orleans three times. Two of the three was just to board a cruise ship bound for Cozomel. The other time was to attend a conference. I'd never really explored the city. So I decided to book a week in the French Quarter. I stayed at the Holiday Inn Chateau Lemoyne which ironically turns out to be just a block away from the Dauphine Orleans which I stayed at a few weeks ago.

I had no real itinerary. I knew I wanted to see what St. Patrick's Day was like in New Orleans. Other than that, I had no plan. And that is how I discovered that no plan is sometimes the best plan.

Every day I'd sleep in. Then I'd set out and just walk. Most times I'd head for Royal Street and enjoy the street musicians. Then I'd usually end up in Jackson Square. That's where I spotted the photo above of a street busker. I found out later that the performer was Amanda Palmer. Palmer was the lead singer, pianist, and lyricist/composer of the duo The Dresden Dolls. But she'd started out as a street performer in San Francisco and New Orleans. I only found out that the performer was Palmer years later when I saw her on a TED talk about connections.

That kind of sums up the trip. I walked. I ate great food. I watched the St. Patrick's Day parade. I turned 41 and celebrated alone on the balcony of a restaurant on Bourbon Street. It was one of the most memorable unmemorable trips I've ever taken.

Now, 20-years later, it is my birthday and I am turning 61. I am married now. I have two children. I stayed on the same career path and can glimpse retirement down the road (but still several years away). But sometimes it feels like it was just yesterday that I was strolling up Royal Street enjoying those unscripted moments of my life.