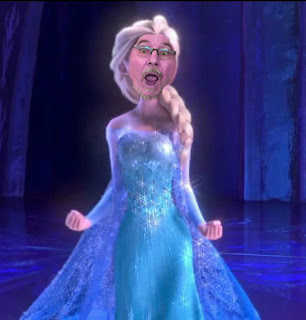 There are certain topics I have struggled with letting go of over the years: the loss of followers of my blog, being invisible, not being funny and repeating myself. I've tried rationalizing. I've tried bargaining with myself. And I've tried going into denial. But the damned things keep rising up like the undead in an episode of the Walking Dead.

And speaking of the Walking Dead, don't you think after all of these years the zombies would have rotted away? They have been decomposing for years and there shouldn't be much left of them.

The thing that has been bugging me most lately is the lack of comments and the lack of readers period. I know I try and just write for myself, but occasionally having feedback used to motivate me if not inspire me.

The hardest part for me is that the people who used to read my blog and comment just seemed to stop without any indication of why. The Gen Z word for it is "ghosting." It's when you completely cut someone out of your life without warning or explanation. Normally it is used when you ghost someone you were dating. But it applies here.

The thing is, it leaves you without closure. Was it something I said or didn't say? Were they bored? Busy? Dealing with there own stuff? You see how easy it is to internalize stuff when people just disappear?

I realize that much of what I blog about lacks relevance to many of the people online. My demographic is Boomers and there doesn't seem to be many of them represented online anymore. The Millennials and Gen Z-ers just can't relate to a past middle aged white man with an odd sense of humor and a tendency to repeat himself about the past.

But it is the ten or so people who used to read my blog and leave these funny comments that I don't understand.

Oh, I know some people just got burned out on blogging and reading blogs. And social media came along and made it easier to engage without too much effort. Plus attention spans have shrunk substantially. And it's not like I read any blogs myself. But that's mainly because the people I used to read stopped blogging.

I'd like to say I can just let it go, but I know it will always bug me until I post my last post and slip off into whatever there is after you ghost yourself.  But hey, since I've been invisible for years, being a ghost should be an easy transition.
Posted by Time at 10:27 AM