The father, the son and the holy ghost 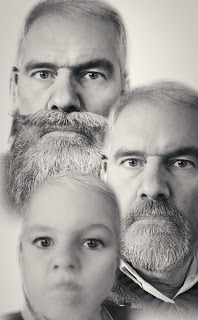 I was always confused by the phrase, "holy ghost" as a kid. I couldn't get the image of Casper the friendly ghost out of my head. Coincidentally, Caspar was the name of one of the wise men or kings who stalked Jesus when he was born.

The disturbing image above is from a filter on Snapchat. There was another one that showed you what you would look like as an elderly person. But I didn't look much different, so I passed. I found this one creepy enough. Again, I can't get over how much I look like my great, great grandfather with a full beard. The spooky little kid me is just wrong. My eyes didn't look that hard when I was a boy. That came with age.

I don't really understand Snapchat or the whole filter thing. They are fun to mess with, but I don't get how people use the app as a social media tool. Why would you send a friend the above image?

But then again, I am a boomer and the mysteries of the younger generations are shrouded in a fog that will never lift in my aged brain.

Though I wonder what barriers were put up between generations before someone came up with Baby Boomers, Gen X-ers, Millennials and Gen Z-ers. I suppose it was just a battle of wills between old coots and young whippersnappers.

The thing that strikes me about the above photo is how much it looks like a portrait done in a photo studio back in the 1960s. Now that is an art that has died...fortunately.

And I do look like a holy ghost. Or at least a ghost.

The image haunts me anyway.