I don't think I'd like to be a penguin 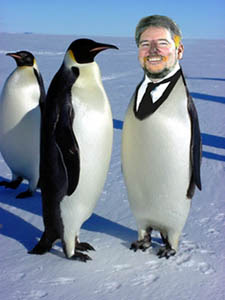 I like penguins. So don't flame me because I say I don't want to be one. It's just that I saw the film, March of the Penguins and frankly, their lives sort of suck.

I mean, what do you have to look forward to if you are an Emperor Penguin? You spend the first few months of your life with your father sitting on top of you. You eat regurgitated fish several times a day. As you soon as you are old enough to waddle, you take a forced hike to the ocean in subzero weather. You basically are on your own swimming and fishing for a couple of years and boom, you trudge 100 miles through the snow back to the barren tundra where you were born.

When you get there, you take part in a penguin version of speed dating with a thousand other penguins who look exactly like you. You mate, the female lays an egg, shoves it at you and then she runs off to a Penguin Club Med while you freeze your tail off sitting there on the ice waiting for the thing to hatch. When the egg hatches you then have to regurgitate what's left in your belly into the baby's mouth until the female returns. If you are lucky enough not to die in the process, you get to turn around and do it all over again in a few months.

So I repeat, I really don't think I'd like to be a penguin, especially a male penguin.

ummmmmm seems to me the penquins have it just right.... dad does the care and feeding while mom goes to club med..... yup sounds about right to me..

as for freezing their tails off.. have you tried living up here in the Great White North???? it doesn't take much .. trust me!!!

oh yeah and one last question.. is it animal week???

Time said...
This comment has been removed by a blog administrator.
4:11 PM

As an animal who just can't handle wasting time getting between point A and point B, (unless the route happens to be scenic, that is), it's that damn waddling I couldn't handle.

And that walk in friggin cold......old news.....it's called walking home from school in Fairbanks Alaska at 70 below zero. But at least I didn't have to do it wearing a tux.

Morningstar, I guess it's just the beast in me. Maybe tomorrow we'll talk about snakes.

Michael, I assume you were walking barefoot.

I find this picture disturbing. You mentioned that all the penguins look alike. Even if I was speed dating as you suggested, I think I would immediately recognize this penguin as being a bit different.

I know I'm a little slow on the uptake, but where did you find this photo? I saw "March of the Penguins" and I never saw a penguin of this variety.

It's really quite simple Shandi. Didn't you ever wonder how they shot all of those close-ups of the penguins for the movie? They wore penguin suits. Well, I own one of the suits. And you know how I go to great lengths to get material for my blogs. I captured this shot. I also met some really hot girl penguins (at least I think they were girls).

Thank God! I thought you were going to say something about layers.

That penguin movie--heavy on penguins. Not enough Clint Eastwood. Penguins. I didn't get it (clearly).

Shandi,
Did I mention the Penquin costume relies heavily on a layered look.

Kristi,
How's this:
A soft-spoken but very macho Penquin approaches the psycho killer Penquin who has just tried to highjack a schoolbus filled with eggs and says:

"I know what you are thinking Penguin, did I eat six fish or only five, well in all this excitement I lost count. But being this is a .44 Magnum Halibut the most powerful fish in the world and I could reguritate your head clean off with it, you have to ask yourself one question, 'Are you hungry?' Well, Penquin, are you?"

I would have to agree a penguin's life sucks. How the heck would you blog with those wings??

Cherish, Very much like I do now. One letter at a time.