In the service of Her Majesty 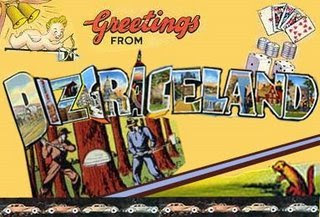 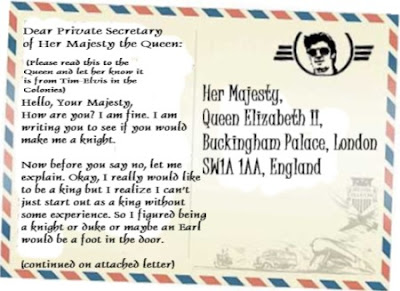 Sorry about that, Ma'am, I wanted you to see my postcard so you know I already have a country to rule. It is Dizgraceland. But you probably have read my blog, so I won't go into it.

But as I was saying, I would like to be a knight and it seems the only way to become one is to be knighted by you. I did a google search to see if there was any online place where I could be knighted, but apparently it isn't like becoming a minister or getting a college degree (you can get those certificates online). Maybe you could talk to some of your people about selling knighthoods online.

I did find out that I could become a Knight of Columbus, but I would have to be a member of the Catholic Church, be at least 18 years old and pay dues. I'd just as soon you knight me if the truth were to be told.

Anyway, as I said, I would like to be a knight so I can work my way up to king. Don't worry. I don't want to be the King of the UK. I know Charles is in line for that (though I think I am actually better suited for the position than Charles...at least I have a beard and much smaller ears). I would really just like to be king of Dizgraceland and being a knight gives it tad bit more credibility (once you have knighted me maybe we can talk about the UK recognizing Dizgraceland as a sovereign state...I refuse to convert to the Euro, however).

Now I know that you normally only give out knighthoods to citizens of the UK (except for Bill Gates...excuse me, but what was that all about) and technically I was born in the United States. But I have never really bought into the whole American Revolution thing and if you look at my family tree, everyone came from England at one time or another. So basically, I'm British. I love the Beatles. And you knighted Paul McCartney, didn't you?

I also know that you generally look for knights who have done something worth being knighted for (like Paul McCartney). I have thought about this a long time and I think I am worthy of becoming a knight because:

1) I would look really good in armor (see my artist's rendition below): 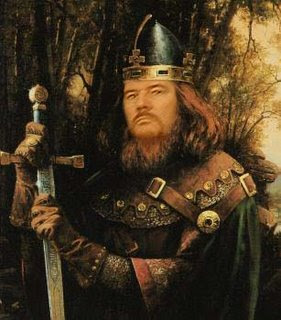 2). I was a Cub Scout and almost made it to becoming a Webalo (I'm not sure what that was either but it was one step up from being a Lion and not quite an Eagle Scout).

3). I received a medal on a ribbon once from Commodore Cruise Lines (now bankrupt) for cruising aboard their cruise lines 25 times (I actually only cruised with them three times...this elderly lady who had cruised 25 times and already had one medal gave it to me...I think she thought I was kind of cute...I do want to note that Commodore Cruise Lines did make sure all of their burned out light bulbs were replaced...long story).

4). I am reading Don Quixote and he was dubbed a knight by a fat Innkeeper.

5). I chopped an entire cord of wood by myself once.

6). I am recognized worldwide as a master of the Claw Machine.

So that is the boon I seek from you fair You Majesty (see, I am already talking like a knight). I would also like to suggest a few titles I've been bouncing around to go along with my knighthood. It has been suggested that King Tim or Sir Tim isn't royal enough. I have admitted that my middle name is Edwin and would be willing to be known as:

Sir Tim Edwin the Fair and Flatulent (one of the medications I take makes me gassy, but as an added bonus, pull my royal finger and I am able to fart a pretty fair rendition of "God Save the Queen.")

Sir Tim Edwin, Duke of Earl (I can fart that song as well)

If any of these grab you, let me know.

Anyway, I know you are pretty busy picking out royal china and stuff so I won't keep you. But please let me know ASAP about the knighthood. I need to order stationary and stuff and start working on a coat of arms (I think the flatulent theme will figure heavily in its design).

Thank you, your majesty.

Your most humble servant,

LMAO!! I think you will need to leave your brain to science after you are gone.

Thank you so much I need a smile this morning!!!

Word Verification GYNNJ are you a GYN in NJ?

Thanks Cherish, but I've been killing brain cells for so long, I don't imagine much will be left when I'm gone. For example, it took me a bit to figure out what you were referring to with the GYNNJ. I thought you were using that Chat code I never understand or referring to my personality type. I'm a bit slow at times. So maybe I should be Sir Tim Edwin the Slow and Special. :)

I was never a Cub Scout but I did eat a Brownie once. As I recall, that led to one of the worst beatings of my childhood. By the way, my mother is Brit/Irish and my father is Italian which undoubtedly led to the reason I wound up traipsing about the outback. I would love to hear your rendition of Advance Australia Fair.

Mickey, I had figured you had some tie to the UK since you use the British spelling of words like "colour." Do you think your mother could put in a good word with Her Majesty? I could get her a good price on ham if she helps me.

And, I don't normally take requests, but I probably could manage the bass line of Advance Australia Fair.

I am so sorry that borish commoner has been wasting your time attempting to hone in on the knighthood we have already been discussing. I shall deal with him in a proper and appropriate fashion.

Sir Alex (aka THE Michael)

P.S. That coat-of-arms you knitted for us is all the rave here at the hold.

That's nonsense you knave! It is not wise to make an enemy of Sir Tim Edwin the Flatulent unless you are prepared to light a match.