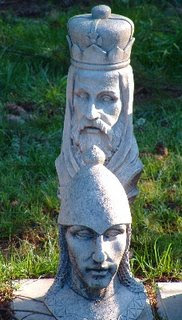 Tess suprised me on my birthday by taking me to stay at a castle. What made it even more suprising was that she hadn't been reading my more recent blog entries about my obsession with being a king or at the very least, a knight.

I had heard about Thornewood Castle in Lakewood, Washington and have been wanting to stay there even before I began my quest to become a king. For one it is supposed to be haunted and two, it was the set for the 2002 Stephen King mini-series, Red Rose (and don't think the irony of me staying at a castle Stephen King has used in a movie escapes me either).

This one was built between 1908 and 1911 by a wealthy Washington financier named Chester Thorne. Many of the materials used to build this 27,000 square foot mansion were canabilized parts from a 500-year old English mansion Thorned had shipped over at the turn of the century. 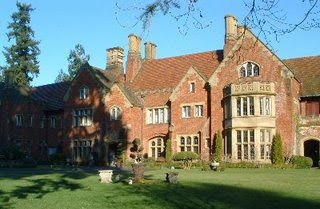 Although Thorne died in 1927, apparently he decided to stay on. The current owners, who operate the place as a bed and breakfast have apparently seen him and his wife Anna at various places within the house and in the garden (which is described as a "fairie mound" by some...not that there is anything wrong with that). Thorne's son-in-law also shot himself in the castle and some say he has been seen as well. 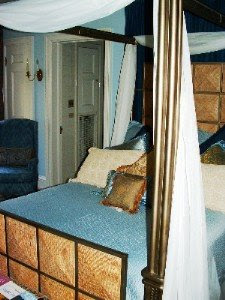 Anyway, we stayed the night in the Blue Room on the second floor. And tomorrow I'm going to chronicle our haunted night in.....DUM-DAH-DUM..... 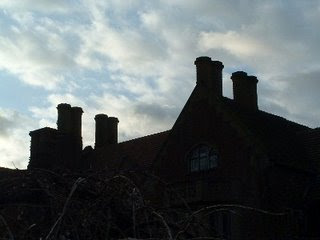 You'll change the way you look at bed-and-breakfast's (and very likely your underwear) after you hear my strange tales.

wow Tim, very cool! What a fantastic Birthday celebration that must have been. You really were one lucky King! i can't wait to hear more about your experience in the Castle. :o)
Hugs,
~gina~

Tim, this is fantastic! I can't wait to read the rest. I love the pictures and the set-up. Haunted Castle! It doesn't get any better than that. Kudos to Queen Tess for her brilliant idea. The coincidence is uncanny. I think you are destined to be a King.

Now that looks like a cool place to stay. Hope you saw the ghost.

Yes,Shandi, Queen Tess provided the royal treatment for my birthday. My destiny awaits!

Lights, or should I say, Mr. King. Don't worry, your secrets are safe...for now.

...remind me never to wear my squire tights in that place.

All great Ones must go on a quest. Your survival of an evening at Thornewood Castle should prove without a doubt your ability to reign as king.

OK, I think your surprise was fantastic.....however, by what measure does this great estate rate as a "castle"? All I see is a mansion. As structures go, this place is not going to hold off any sieges. It doesn't even have a moat OR drawbridge, for Bob's sake! If this place can get away with claiming to be a castle, then darn it, so can mine!

I AM looking forward to the ghost story!

Fear not Squire Mickey, it was not as sordid as it sounds. But I do believe the spirits were asking what was rotten in Denmark once Tim Edwin the Fair and Flatulent passed through the castle.

WOW what a fantastic birthday gift! Your wife is very thoughtful!!

I am happy you had a great time!

Thanks Cherish, it was one of the nicest birthdays I've had. Tess knew I like haunted hotels, so this was the perfect gift.