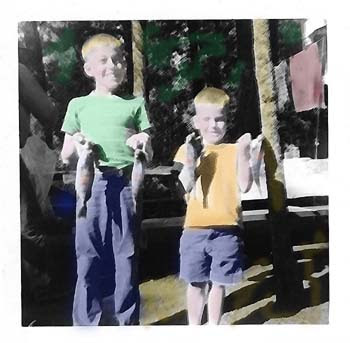 Time it was
And what a time it was
It was
A time of innocence
A time of confidences
Long ago ... it must be
I have a photograph
Preserve your memories
They're all that's left of you

"Bookends Theme" by Simon and Garfunkel
As I've been sifting through the photographs I've been scanning as part of my family tree project I've run across quite a few shots of my older brother Dan and I. That's him on the left in the photograph above.

I can imagine me being born the day before his birthday pissed him off. He was the 4-year old baby of the family and boom, I came along and messed up his birthday celebration and moved him up into the middle child slot. I don't think he ever really forgave me for that. 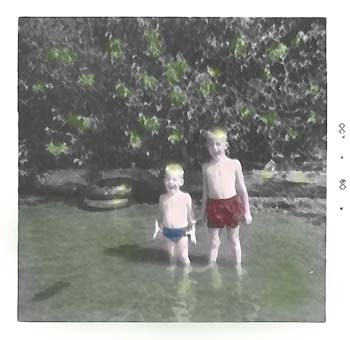 I marvel sometimes how different my brothers and I grew up to be. Ted, my oldest brother ended up in a near nameless small town in Oregon working for the highway department. Dan stayed in Boise and became a teacher. I ended up Seattle and by default, marketing. And in this era where you reach out to someone on the other side of the world in the blink of an eye, my brothers and I rarely talk.

I sometimes wonder if it is because time creates distance that can't be bridged with small talk. It's hard to share hopes, dreams and disappointments in annual visits on holidays. I know the Cliffnote versions of my brother's lives, but that is about all. We share common parents, but not opinions or paths.

And it is not that I don't love or care about my brothers. I look at the photos and realize that they may not be part of my day to day life, but they will always be in my memories and in my heart. 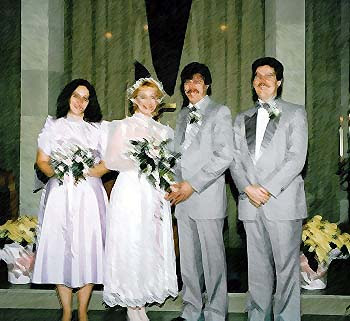 So to my big brother Dan, I wanted to wish you a happy birthday and tell you I'm proud of you. I have always kept the newspaper clip that the Idaho Statesman ran about your first year teaching and I think you produced a couple of amazing children (though I don't think they realize how lucky they are to have an uncle like me). And I wanted to remind you, that just like at your wedding, I will always be the best man.

I had to get that shot in. He's my brother after all.

Old age is fifteen years older than I am. - Oliver Wendell Holmes

Knight of Many Moons and Winds,

May you always face the wind and never step in my puddles. You are indeed the best man I know.

Happy Birthday to you and your brother. It's funny about relatives. We have genetic code in common and yet I couldn't be more different or know less about about them.

I think it's pretty cool that you put your face on the best man. :-)

Smiles and gives King Tim/Elvis a big ole Birthday (((((Hug))))). HAPPY Birthday Tim!!!! Great post and photos as always. You were and still are such a cute wee lad! I always love your sense of style and grace. Also hope you had a great St. Pats Day. Wishing you lots of love, luck and happiness and many years of great blogging too!
Hugs,
Gina

Happy Birthday Tim. I hope you and Tess get to do something nice to celebrate.

I had to laugh because my son is one year older (shy 3 days) than my nephew. When he was little he could never understand why his cousin's birthday was first if he was older.

I hope you had a wonderful B-day!

Many thanks my poetic squire and incontinent friend Mickey. I especially like the Oliver Wendel Homes quote.

And Shandi, I thank you and my brother thanks you. If I had used photoshop on the wedding photo, I think I would have made me look more buff. :)

And thank you so much Gina, I'm blushing (though that could still be the sunburn I got on the cruise).

Thanks to you, too, Lights. Tess took me to a castle for my birthday (not WhiteCastle, either). I shall blog about it soon.

And finally thanks to Cherish for her well wishes and understanding the paradox of having a birthday before someone older :)

Just got home from work, so of course I'm late coming in. Happy birthday. I have no idea what it's like to have a brother, much less relatives. Oh, I DO have relatives.......lot's of them....somewhere.

Good thing I never had a sister. Bob knows how many times I would have had my assed kicked defending her honor......grin.