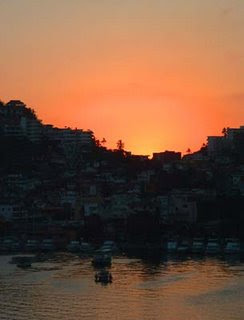 I was tempted to recount a day-by-day account of my vacation to you but then it occurred to me that that would be about as fascinating to most people as me posting a log of my daily bathroom habits. This is not to say that I won't be posting a few photos and anecdotes about the trip (minus my bathroom habits). But I'll just feed them to you in spoonfuls instead of sticking a feeding tube down your throat.

Ironically, one of the obstacles to writing about my vacation was that it was pretty much one of those rare trips where everything goes smoothly. Our flights were on time. We had great weather. The ship was beautiful. We ate, drank, danced and even did a bit of gambling (I stuck Mr. Carnival Cruise for $220 from the nickel slots on the second day out). It was a great trip. So it is hard to write an entertaining blog when nothing really went wrong.

But then again there were the light bulbs. It was nothing really. I mean, we had this great cabin on the bow of the ship with an extended balcony. Okay it was a suite. But I got a great deal on it. It had a King sized bed and lots of space. There were wood floors and trim. There were granite counters in the bathroom and get this...a full sized jucuzzi tub. It would have been perfect if there hadn't been a burned out light bulb in one of the lamps next to the sofa. 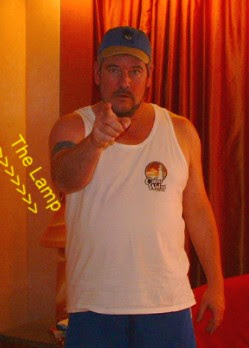 Okay, this may seem like a small thing. But I've been planning this vacation for months and everything was perfect about this cabin except the stewart would not replace this light bulb. I mean, it was burned out when we checked in. I let it go the first day. He'll change it, I thought. I don't need to make a stink about a light bulb. It is petty.

The second day came and went and the bulb remained burned out. Maybe he doesn't know it is burned out, I reasoned. So I removed the burned out bulb and placed it in plain sight on one of the towel animals Carnival cabin stewards create each night to entertain the guests. I think it was supposed to be a bull. 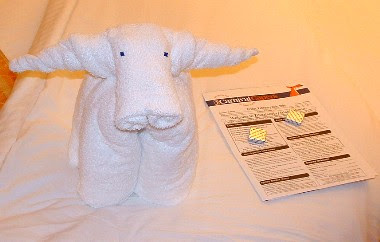 When we came back to the room, the towel animal and the burned out bulb were gone, but he still hadn't replaced the light bulb. I started to lose it. I had dropped a couple of grand on a cruise and I expected a light bulb to be replaced. It was my right. I deserved to walk into that cabin and turn on every stinking light any have it work.

I know what you are thinking. Why didn't I just talk to the guy? Because room stewarts are like leprechans. They appear magically when you leave the cabin and disappear before you return. Oh, I'd catch a glimpse of him down the hallway grinning at me now an then. One time I swear he had a box of light bulbs in his hand, too. But he was always gone before I could catch him.

So I left a note. It was a pleasant note. It said "please replace the burned out light bulb." I stuck it to the lamp when we left the cabin for the day. When we returned, the note was gone. But the stinking light bulb wasn't replaced. DAMN YOU STEWARD, I screamed. NOW IT IS PERSONAL!

Tess tried to calm me down. She suggested that maybe he couldn't read English. But I knew the truth. The steward was toying with me. He knew I wanted a new light bulb and he knew he was the only one who could provide it.

I began thinking of ways to make him change the light bulb. I thought about removing every light bulb in the room. Surely then he would have to replace them so he could see to make the bed. Or I could hide in the closet and leap out when he darted in to fill the ice bucket. DONDE ES EL LIGHT BULB, I'd scream.

But Tess talked me out of all of my schemes. Just relax, she said. Enjoy the cabin. We don't even need that lamp. So, I let it go. And on the last day of the cruise as we were stepping off the ship, I took one last look up at our balcony and I'm sure I saw the stewart standing there waving a single light bulb at me.

But it's not over yet, compadre. I'm writing a letter to Carnival. I'm filling out that comment card and I'm sending e-mails. I don't care how long it takes or how many cruises I need to go on. You will change that light bulb.

AAaaww, welcome back Tim and Tess! Sorry your trip wasn't just a lil bit "brighter". Givem HELL, they deserve it! I'm glad you both made it home safely. Nice to have you back.
Hugs,
~gina~

OH MY EVER LOVE'N GOD.. Bless America. What in the *bleep* do they think they're doing here. That is a clear safety hazzard. You could have come in one night from some heavy drinking. You could have reached for that particular lamp as your only source of light. If you were to say... fall down and break something (something in the room of course) and maybe bruise or wound (your pride)... you could totally sue. You should have kept a written and photograhic history of your attempt to have the bulb replaced. Get yourself a lawyer (liar) and sue the pants off 'em.

Thanks gina, hope you found my light bulb story illuminating :)

Shandi, good idea. I'll sue Mr. Carnival for everything he's got. No American should ever have to put up with a burned out light bulb again. We invented them for Pete's sake. And I did document the light bulb saga with photographs. Unfortunately there wasn't enough light for them to turn out. :)

You are so funny!!! Damn leprechun not allowing you the pleasure of a light bulb. They should be ashamed. I have already started a letter writing campaign. They are in trouble now. PSSST Your room sounded fantastic!!! I mean ALMOST perfect. Darn lighbulb!

Thanks Cherish. The cabin was great despite the light bulb. And thanks for supporting the letter writing campaign to Carnival. Together we will help them see the light. :)

VENDETTA! One way or another, those evil cruise honchos are gonna PAY for depriving you of those lumens! Yessiree, I say go for it, make them suffer!

Or, you could just admit to yourself that Bob showed up and threw in that monkey wrench just to give you something funny to blog about.

I'm nothing if not vindictive. Well, petty too. It's part of my charm.