Keeping the moon at bay 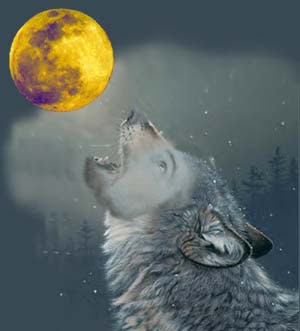 And if the cloud bursts, thunder in your ear
You shout and no one seems to hear.
And if the band you're in starts playing different tunes
I'll see you on the dark side of the moon.
--Roger Waters, The Dark Side of the Moon

“Promises are like the full moon, if they are not kept at once they diminish day by day”
--German proverb

It was a full moon yesterday. I could feel it before I confirmed it with the calendar. Nothing seemed quite right and I couldn't blog for the life of me. Which is a bummer, because I'm really trying to write every day.

I did feel like howling if not writing. So perhaps I was just moonstruck. But I suppose thinking a full moon makes us looney is just an undocumented myth like the evils of secondhand smoke. All I know is that the full moon leaves me feeling a bit discombobulated. That and knowing that I very likely will not hear back from the Queen of the UK and won't receive my knighthood.

Which leads me to another big downer: I finally did find several sites online where you can get a title of nobility. The cheapest-- Peerage Confirmed, Authentic Titles of Nobility -- allows you to send in an application to be a Knight, Duke, Duchess, Count, Countess, Marquis or Marchioness. Once accepted (and you check clears), they will send you a genuine certificate stating you are whatever royal title you paid to be. The title is conferred on you by "Prince Douglas" who was "raised from the Rank of Baron to that of Prince in 1991 by the Orthodox Patriarch of Antioch (Jacobite Rite) The Lord Alexander II." That sounds pretty darned impressive to me. Becoming a Knight costs $150 U.S. And it costs $1500 to become a Duke. It doesn't say what it costs to be a Squire (sorry Mickey, The Incontinent).

Okay, call me a lunatic, but I'm thinking this deal falls into the same category as buying Sea Monkeys. I'd send in my check to get my titles and I'll end up with brine shrimp.

To top that off, I discovered the United States doesn't recognize any titles of nobility, so even if I got my certificate of authenticity from Prince Douglas, the nasty little bureacrats at the DMV wouldn't let me call myself Sir Tim Edwin the Fair and Flatulent on my driver's license anyway.

Sigh. I'm going back up on the roof and howl. I think the neighbors are starting to get used to it.

But I think it still kind of freaks Tess out.

Everyone has their quirks, though.
Posted by Time at 12:12 PM

Good God! Now I’m having dingo flashbacks! You have no idea how closely the werewolf is linked to my schizophrenic nonsense.

Don’t worry about the whole squire thing. I checked out the tights and there is nowhere to shove my boomerang.

Sorry about the flashbacks. I had toyed with displaying a different kind of moon, but I think that may have been even more disturbing.

I've never heard it called that before, but I have the same complaint about fitting my "boomerang" in tights as well.

A full moon means things at work are going to get dicey. Our ER turns into a zoo every time. And I get alot more patients to practice my bondage skills on, under the guise of keeping them from pulling out every line and going for a walk.

Sorry about your knighthood, dude. Send ME the check and I'll apply your blogger buddy discount, but I still won't be able to square your title with the DMV. those bastards.

Thanks the Michael. See that's the kind of data we need to show that the full moon does affect things. And I'm pleased that you are going to step up tot he plate and pay for my knighthood. What a guy!

Well that sucks! We will still call you Sir Tim.

Great work on the pic.