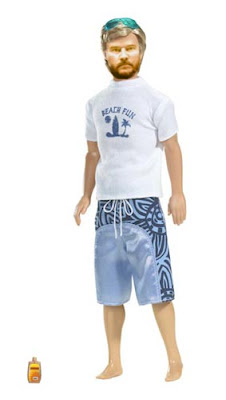 Unless I happen to get offered a role in the next Star Wars sequel, it is highly unlikely I will ever have an action figure modeled after me. Ordinairy people do not have action figures. Oh sure, there is Ken. But Ken is not an action figure. Ken is a doll and Barbie's androgenous be-otch.

There is a lot of press about how Barbie represents this unrealistic image of a female ideal. She is tall, blonde and unproportionately busty. Regardless, she has been popular for years with young ladies (and a few young men). I don't know of any one who thinks of Ken as a role model, realistic or unrealistic. He is a wimp. I'm not even sure why Barbie hangs out with him.

I think it would be more realistic if they created a Ken doll that had a pot belly, double chin and farted when you pulled his finger. He would also be commitment phobic and ignore Barbie. You can bet Barbie would be all over him.

Then Ken would be an action figure.
Posted by Time at 12:20 AM

Don't hate Ken because he's merged with his anima.

By the way, I think Shandi understands why Barbie digs having a queer boyfriend.

Now if you'll excuse me, I have to go look for my manhood. It dropped off sometime after my anima incident and before I returned from the desert.

You know, there is a librarian action figure based on Nancy Pearl. Not to be argumentative (because I'm naturally very agreeable, as you know), but that means there are action figures based on real people. When I was at Ashland last week, I also saw William Shakespeare action figures in the gift shop (not that the kids were scooping them up as recruits to battle their GI Joes or anything).

Mickey, I don't hate Ken. I just don't respect him. But speaking of looking for manhood, that was another point about Ken, he doesn't come packaged with accessories.

Kristy, I think the operative word here is "action." And Anima is the female side of a male's personality.

Mickey's notorious for his spelling, he probably meant "enema".

By the way, THE Michael Action figures are now available on my blog. He comes with his own real wood soap box, a herd of goats, and a stethoscope.
Get yours today!

Dear Tim, not only does Ken not come packaged with accessories, he doesn't come with a package. He's unit-less. Not sure about Mick's anima analysis ... maybe Ken simply had sex reassignment surgery that went slightly awry. BTW, the pic if frickin' hilarious! Bravo Photoshop God!

THE Michael, I'm pretty sure Mickey was referring to his Anima. Getting in touch with your enema is possible, but not recommended.

JanePoe,
That was kind of the package of Ken's was alluding to. And bless you for noticing and appreciating my TimId-Ken photo. But I suppose I should have enhanced the package as well...sigh.

This is neither poetic nor thought provoking nor even particularly deep, but Tim...I would buy your action figure any day. Even minus the accoutrements....

Thanks Miss Bliss, but the manufacturer pulled the plug on production. Something about nothing to fear but fear itself :)

Yes, Shandi does understand why Barbie digs having a queer boyfriend. I'm still looking for one. Every girl needs a Ken to share fashion tips and go shopping, but Barbie has other needs that only G.I. Joe could meet. However, if G.I. Joe were true to form, he would come with a mini playboy mag stuck in his back pocket, a bottle of hand lotion, and... a different Barbie in every port. This is when Ken comes in handy; a plastic shoulder to cry on.

Shandi,Mickey's the one that started the "Shandi understands having a gay boyfriend" stuff. I was just writing about how pathetic Ken dolls are.

Barbie hangs with him because he has a cool car, money and women love gay guys!

I happen to know that Ken is more show than go with the car an money. And the fact that women love gay guys may make sense from an emotional standpoint, but it does not bode well for the species. :)