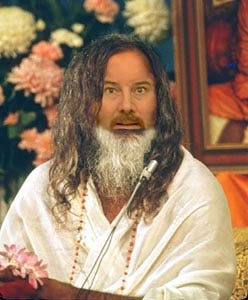 "Jai Guru Deva Om"
--John Lennon, "Across the Universe"
I used to think John Lennon was singing, "High, Grooooovy Dayyyyy....old man" in the song Across the Universe. I can be forgiven for thinking this because Lennon was the same man who wrote "I am the walrus, goo goo ga' joob." Later I learned that John was actually singing, "Jai Guru Deva Om" which roughly translates "Victory to Guru Dev." And Guru Dev was Shankaracharya Swami Brahmananda Saraswati -the guru of Maharishi Mahesh Yogi who founded the Transcendental Meditation movement.

I suppose that doesn't mean much to most of you now, but back in the mid-70s you couldn't swing a dead cat without hitting someone who was sitting in a corner meditating using their own private TM mantra (that you could only get by attending one of their high-priced seminars). One of my brothers was into TM. Now he listens to Rush Limbaugh, so I don't think it led to inner peace.

I was never into TM. I couldn't afford the mantra. Years later, I did take a course in a local experimental college in creative guided meditation. The instructor taught us how to journey into an inner happy place that we created and surround ourselves with healing light. I could never quite get the hang of it because I kept moving furniture around in my happy place trying to make it more comfortable. I do remember having to go down lots of worn marble stairs to get to it (which may explain my recent nightmares).

Part of my problem with trying to meditate is trying to clear my mind of thoughts. Years of conditioning has instilled in me that a blank mind means you are an idiot. So as I sit to meditate, I catch myself thinking about not thinking which is thinking. And just when I think I'm not thinking, a stray thought streaks through my brain shaking it's private parts at my attempts not to think.

The only way I've really found to clear my mind of thoughts is watch reality television, and preferably something from the FOX Network. Dog the Bounty Hunter works pretty well, but it leaves me with this nagging desire to grow a mullet, scream "Mahalo" and menace the neighbors with a Costco-sized can of pepper spray.

Oh well, as John Lennon said, nothing's going to change my world and everybody has something to hide except for me and my monkey.

"a stray thought streaks through my brain shaking it's private parts"

I'm still laughing at that one. I briefly tried meditation. I have the same difficulty in not thinking. I developed my own method of thought obliteration. Eventually though, I always end up falling asleep. I suppose I should do one of those painful flexibility poses at the same time in order to keep myself awake. Little hard to fall asleep with your legs around your neck.

Shandi, very good point. However, my legs and my neck have always been and will always be virtual strangers because I'm never going to get my foot behind my neck unless someone from the Sopranos is stuffing me into a trunk. :)

Tim, your blog is my happy place.

By the way, I find myself looking at that photo and thinking I wonder what he is thinking.

I'm wondering the same as Mickey. You've got that spiritual-deer-in-headlights look about you in that pic, Tim!

Tim, I just came in from a cremation ceremony, soaked in sweat from the humid hot night air and the intense heat of a funeral pyre, and really needed to center myself. First thing I did was call up Dizgraceland. Thank Bob. If anybody could make me laugh, it's you!

Aside from the hilarity of tonight's post, I want to thank you for being here, wether you actually wanted to or not, to lift my spirits and let me know that as far as deep, silly, uplifting, Monty Python style intellect is concerned, I am not alone in this universe. I hope they never nail down string theory, for that will ruin it for us having explained for us the likes of a wonderment called TIM.

Mickey, My only regret is that I can't keep all of the rides running at the same time time.

JanePoe, Thinking tends to give me that deer in the headlights look.

THE Michael, thank you my friend. I hope Ozzy is romping around in a better place as we speak.

A routine I use to get out of my head is to take a shower without "thinking" words. I find that it is much more efficient because it takes time to think to oneself "soap," "I need to wash my hair" or "white tiles covered in spray" rather than simply being there in the moment and reacting. If only I could do that all day...

That pic. is too funny! Aaahhh, that happy place. ;o) Thanks Tim.
Hugs, ~gina~

R. I generally sleep in the shower, so you may be on to something.

Gina, Thanks! Glad you like the photo. I'm thinking of offering a happy meal at Dizgraceland next. :)

I know exactly what you are talking about!! I have the hardest time sleeping so I always try to clear my mind. HAHA thats a joke then I start thinking about clearing my mind, then about not thinking then about blank space then I find myself obsessing over it. ARGGHHHH!!!!!!!!!

This was very funny! I was 13 when I was initiated into TM in Cambridge, MA. I don't remember who my initiator was. My sister was Maharishi's chef when he was in Majorca. She is a teacher of TM. Nevertheless your statement about thinking about not thinking which in fact, was thinking, certainly resonated with me because that's exactly how I felt. I never transcended, not even once. I still remember my mantra--I guess one never really forgets that. But Jai Guru Dev and Maharishi Mahesh Yogi are all dead and they are unlikely to get mad at me for what was, at least for me, a crock. I can't say that for all, because my sister, prior to her experience with TM, had been a junkie. She never again touched drugs. So what works for one doesn't necessarily work for all and what doesn't work for one doesn't mecessarily not work for all. Still your experience with TM is very similar to my own. Prior to initiation we had to go to two seminars. Then my father paid to have my whole family--mother, father, 3 girls and 2 boys initiated into TM. So all of us ould have sat around the living room burning incense and chanting 'om' til the cows came home (so we could worship them)and still TM would not have done anything for me.

Oh and one more thing...TM was supposed to make us feel energized after our sessions. It makes sense. I never once failed to fall asleep during my sessions. Of course I felt energized--I just had a nap!

Yikes! This is an old post. Is it now obsolete? Have you successfully cleared your mind?

Thanks Mary, glad you liked the post. I think 2006 was my best year for blogging. But I try not to think about it too much.

BTW, I stopped by your blog, "Mary's Mustings." Brilliant in it's simplicity. The TM must have paid off :)

I wouldn't say the post is obsolete. But I do think I've successfully cleared my mind because I'd forgot all about writing it.